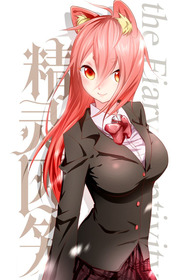 In this futuristic world, humans are ruled over by faeries. The young master Yue Hu encounters the fairy Fei Liai, and gradually uncovers the truth and dark secrets behind them...

571 users are tracking this. Log in to see stats.

Welcome to my very first manga review, which will be brief. I decided to write it since I am the one who has done the character moderation for this manga. This review is SPOILER FREE. STORY The manga revolves around an apparent dystopian, fantasy, futuristic world where humans are ruled by faeries. Compared to humankind these faeries possess magical powers with some having extraordinary ones. A young man by the name of Yue Hu encounters one such faery of greater power. Her name is Fei Liai. Together, they become friends as Yue begins to uncover the true nature of the faeries. It's a relatively clichéd story of a futuristic world where humans are sujugated by a greater power, civilization, etc. In this instance it happens to be human-sized faeries, who tend to be enigmatic and quasi-totalitarian. This clichéd plot doesn't make the manga bad necessarily, it just makes it feel typical and mundane. ART From the source I read, the art is inconsistent. Even when it's at it's best, it is just OK. However, it's more easily forgiven because of the fact it's done completely in color! That was the main draw for me, no pun intended. That is why it scores as high as it does, and it's the only reason why. Take the color away and it's mediocrity at its finest. CHARACTERS First off, many of the characters have unusually shorter names, even for Chinese-based ones. As mentioned, the entire faery populus is enigmatic. Yue Hu is both a mysterious and seemingly weak character himself, who happens to be in the wrong place at the wrong time. He practically adds nothing to the story, especially in the earlier chapters. However, later on he does develop some powerful abilities, which seem forced, unexpected, and out of place. On the other hand, Lei Fai is the counter part main character to Yue, who's a hot, fox-eared faery who's a bit on the ditsy side. She can be charming though. The rest of the cast is nothing impressive either. However, I do like the trio (Lin, Lu, and Peng) that accompanies Yue through most of the 55 chapters that I read where he was involved. OVERALL If you're into an artistically colorful, desolate fantasy that features an inconsistent human main character and a hot faery one, then this is your type of read. If you're into reading a predictable, re-hashed storyline, then this definitely for you too. If you're not into any of the aforementioned then you may want to skip this one. It's not horrible, but it's nothing brag about. I ended up losing interest myself and dropped it after reading 55 chapters. ENJOYMENT SCORE:  6/10 Chapters: 55/194 1️⃣Weighted Average System Score: (15 + 14 + 12 + 12 = 53/100) Additional information: Manga Source: Online