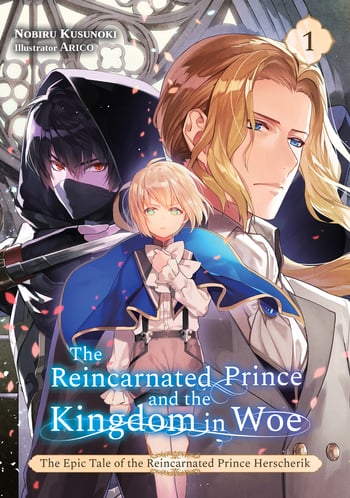 If you're looking for manga similar to The Epic Tale of the Reincarnated Prince Herscherik (Light Novel), you might like these titles.

With the progression of his Chuuni Disease, Shioda Tetsuya is shunned by his family, and dies in despair, a thirty three year old jobless virgin. He vowed that if he was born again, this time he would stay away from delusions and live life seriously. Fortunately, he reincarnated in another world as a girl named Tilea, and lived a happy life with her kind parents and adorable little sister, but... Lately, she'd been troubled. Her beloved sister had begun talking about how she was actually one of the Six Demon Generals, serving directly under Demon King Zorg, a descendant of the Three Great Demons. The situation was looking bad. She had to do something before this Chuuni Disease got any worse!

There was a beautiful princess called Arue in a certain small country. However, there was another girl named Selene, the second princess, another beautiful princess hidden in this country named Selene. Treated as an abominable child by her androgyny, kept secret by country, and lived a quiet life in a dark room. But Selene had a bigger secret than anyone knew. The inside of Selene was an old man…

Ren, a ten year old orphan girl, was en route to being delivered to a corrupt merchant. However, bandits attacked the carriage she was on and caused it to plummet down the sides of a cliff. But the impact from the accident awoken her memories from a past life. She was from a world called Earth, and was once a male researcher in his mid-thirties who had died in an explosion resulting from an experiment gone awry. According to her memories for the past ten years, she had reincarnated in another world after dying and grew up in an orphanage. In order to escape a future where she would be enslaved by the merchant, Ren will draw upon the knowledge from her past life and magic aptitude for all elements, to create new forms of magic and survive in a harsh, new world alone.

Shuuto, a Japanese teenager, dies earlier than planned due to God's mistake. To make up for it, God decides to reincarnate him into another world, and give him a special ability as a "present". Shuuto, a lazy boy who absolutely hates having to put in any effort, work, or be placed in any danger, says to God: "Just let me live and have fun." With that, God grants him the "Raising Funds (L)" skill, and sends the kid on his merry way. Unfortunately, he quickly finds out the problem with his cheat ability: it's not an infinite money generator, but a loot modifier. As in, it only works if he defeats enemies? He actually has to work for his coin?!