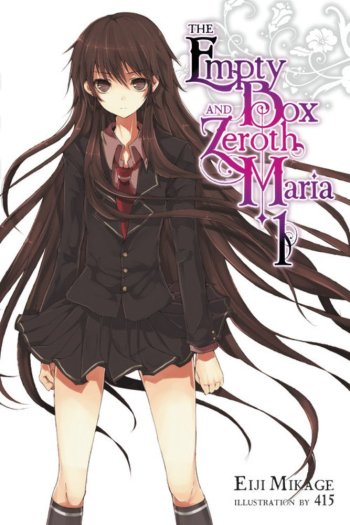 Kazuki Hoshino treasures nothing more than his ordinary life, and March 2 should have been an ordinary day. The arrival of a transfer student, the mysterious Aya Otonashi, shouldn't have shattered the world he knows. He's never seen this girl before in his life, but she says she's met him thousands of times--and declares war on him for a crime he can't even remember... As the truth begins to unravel, nothing is as it seems, and at the heart of it all is a wish powerful enough to change everything...

This is most definetely the best book i've read in my life, and i'm still reading through it, i felt the need to review this as it is definetely something worth reading and extremely addicting. Story - 10/10 The story unfolds itself in a way that gets you addicted to it. Utsuro no hako to zero no Maria tells the story of Kazuki Hoshino, a boy almost madly attached to his everyday life, and his supposed to be antagonist, Aya Otonashi, who transfers into his class - for the 13,118th time, when she decides to do something different, and announces to Kazuki that "she will break him", on the following events their relationship changes more and more, up until the point that it is *almost* romantic. However they find themselves that their true enemy is a being that could be god. It's genres are: Action, Mystery, Drama, Horror, School, Supernatural, Psychological, Thriller and a romance, which is a major spot in the Novel. Art - 8/10 The art itself is pretty good, however, there is not alot of art, remember this is NOT a Manga it is a Light Novel, so you can expect only 10-15 images to actually appear, and this includes the volume's cover. Characters - 9/10 The characters in this light novel are one of its best points, every single character that enters the story will have its own explanation of life, it gives a big spot to their backgrounds, so much that even the story of a dead and only mentioned character could make you sad. I myself found me like that during several parts of the story. Kazuki Hoshino - 9/10 Kazuki is indeed a very good character, like many other japanese fictional characters, he is kind-hearted and very oblivious to his and other peoples feelings, however, he is different from any and all other characters you'll see. Kazuki is a teenage boy almost madly attached to his everyday life, so much, that he can't live a life without it, he is kind-hearted and is against any kind of violence, however, once he declares even if only in his mind that someone is his enemy, he will use any means to stop that person, even if it means having them experience a "Emotional Breakdown" such as using the persons most trusted one to betray him and experience something more than traumatic. After the events of the first volume he is more than 76 years old, however, he himself does not change, and the time also doesn't pass. Aya "Maria" Otonashi - 10/10 Maria, is without doubt my female character. She shows signs of a "Tsundere" Personality sometimes, and even a really small dose of "Yandere" Maria Otonashi, is the female heroine, she cares more about other people than her ALWAYS, not minding to lose the memories of his loved ones or life not to hurt others, for that reason she changed her name, to not care about herself, have no attachments to anyone and just help other people, however, Kazuki being the most important existence for Maria makes her want to stay with him and be attached to Kazuki, however, she will still help others when needed. Those two are the most important characters, however, they are not the only main characters, if i told about them, it'd lead to BIG spoilers, so i will refrain from telling about and let you guys read it and know for yourselves. Overall - 10/10 This story is the best one i've read so far, not only as a book but better than the story of any other anime, manga or visual novel i've read so far, i myself, was against reading it, since i do not like Light Novels because they have only letters, like a book, but this story was worth it, i got completely addicted to it and it only gets better, if you do read the story you will love it, it is most definetely a masterwork of Mikage Eiji