The Elixir of the Sun - Recommendations 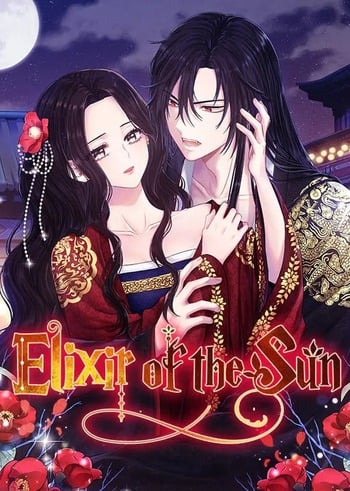 If you're looking for manga similar to The Elixir of the Sun, you might like these titles.

For 7 years, marriage was banned in the Kingdom of Great Joseon because the King lost his precious wife. Enter a marriage fraud specialist to save the day (while she sends the King and his trusted General into emotional chaos).

I possessed a supporting character in a reverse harem novel. As a young concubine who gained the interest of the empress. The concubines, the male lords, eventually killed her for treason. Fortunately, I possessed her just as she was entering the Imperial Palace. Everyone in the Imperial Palace was wary of me, but didn't hate me yet. I don't need, nor do I want to be loved by the empress. "Come to my room tonight. I'll read you a fairy tale!" 'Woo, don't cry. I'll give you this." But why is everyone so soft towards me? I couldn't understand.

Moo-young is a fierce beast who disguises as a puppy to gain love. Hwa-yeon is the girl who raises and trains this large puppy, oblivious to its real identity.

Unable to endure the greedy and unscrupulous people from his wife's family, Duke Arthur Kaplan demands a divorce from his wife, Roxanne. Knowing fully well that as soon as she gets divorce her family will sell her out to another man, the Duchess offers a bold proposal. She asks permission to have an affair with another man before the divorce, so she could finally enjoy a short period of freedom and finally knows what it's like to be cherished by someone. Roxanne then meets a kind gentle with a mask that seems to fulfill all of her desires and that feels strangely familiar...!

Don't Go to Wendy the Florist

Wendy is a reclusive florist who doesn’t believe in love. That is until he came in, ready to destroy the walls caging her heart.

Third season of Don't Go to Wendy the Florist.

Second season of Don't Go to Wendy the Florist.

History at the Library (Promo)

Perdi, known widely throughout the continent, is a very famous author of adult novels. But Perdi’s true identity is actually Vivian, the Imperial Night Librarian. Vivian sends over the fourth draft of her latest novel to her publisher to be reviewed, but her work is criticized because the way she writes hetero sex scenes isn’t erotic at all. “What? So you’re saying I’ll only know what sexual relationships are like after I experience it myself? But what can I do when I’m bound to a chastity contract?” Unfortunately for Vivian, she had to sign a chastity contract in order to be hired as an imperial servant, and has been forced to remain a virgin ever since. Worse still, only a member of the imperial family could break the contract... but Vivian only has eyes for Ray, a mysterious man who visits the library every night...