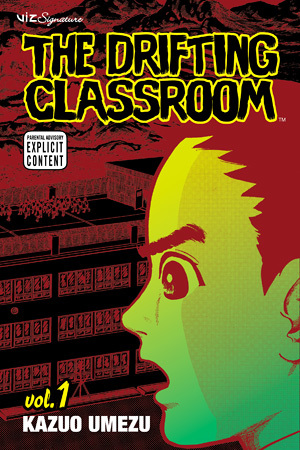 Old school horror manga, you will love it. In here we have a very extrange story, lost children, deadly monsters, insane teaches, a forever loving mother and visions that travel through time. I am sure you will not stop reading till you reach the end.  This is so good it was even made into a real life movie.

Story: Survival Horror, one of my favorite genres, and this one does it justice. It's a tale about an elementary school, like the one you went to, except they deliver bread to it. But one day, it gets sent to a wasteland devoid of life. And the kids, teachers and that delivery man, are stuck there. What ensues is the usual by human standards: panic, hysteria, denial and the usual, except for a twist or two that elevates the shock and disturbing factors.

The series is quite good on being disturbing, and not just because it's focusing on little kids. They're human still, and think like humans and being in a strange land with no way back home, you'd think kids would break down quicker than adults or adults would go crazy more from their longer life or something, but not entirely so. They act like humans and being relatively unpredictable is what helps to make this appealing. The horror partially revolves around the human psyche and how it breaks down into more animalistic parts, like any other survival horror with medium to large groups.

Granted that it isn't all good shock horror with blood, although there is quite a bit of blood, it delves into some... sci-fi stuff I guess, hence the tag. It gets kinda weird and sometimes it just doesn't work for me. Kinda split but it'll get plotty and a bit spoilery if I try and explain it. Another negative is how it feels like it drags at times. Don't get me wrong, I liked it loads and the horror, but sometimes it's a bit slow and plods a bit.

Not all the horror works but for the most part, I was either creeped out or disturbed, and it plays realism when it wants to pretty well. But have to give a non-descriptive shoutout to a moment in the ending, which was fucking hilarious.

Art: You don't see stuff like this anymore. For a 70s manga, it looks damn fine. The blood, the little kids, the adversaries they face; looks pretty damn good. Nice artwork abound and should please you picky persimmonies if you aren't too jaded by the fancy, smooth, new-age art work.

Characters: Ouch. On one hand, there's kids acting like kids, adults acting like adults (Gotta hand it to him for that delivery guy) and then there's the MC Shou, who is mature beyond his years. Way mature. Felt unbelievable how this guy was so chill and collected compared to the raging masses and the guy's fucking solid as a rock! The shit he goes through and he's the fucking paragon of sanity.

Sorry, lost myself there. There are some lightweights in his band (MCs in these series always have a close group of friends) and he pulls most of the weight but... I don't know, the events got me more than the characters. Just wasn't sold on the majority of them.

Overall: Disturbing, bloody, cruel, Lord of the Flies, brutality, it's got it all and with children, that makes it 1.5x more disturbing. The sci-fi bits are hit or miss and when they miss, it kinda drags you out of it. The characters are so-so and the events are what bring it together, as fucked up as they may be.

The best part of this manga is its intensity and dramatic portrayal of crises. Unfortunately, that's also one of its weaknesses. Immediately after each crisis is solved, a new crisis begins. So even though we can't predict exactly what the next crisis will be, the inevitability of the life-threatening drama actually makes it feel more dull. On top of that, many times it feels like the resolutions to their problems were kinda cheap--like the author just wrote them out of it. In fact, a recurring "solution" is Sho's mother and each time it's used, it just makes the story feel weaker. Not to mention the fact that these children are way more industrious, resourceful, and knowledgeable than they probably should be and keep finding new resources even after they supposedly did inventory on the whole school (I'm looking at you, whiskey girl--from ch. 36).

The story takes a few chapters to get off the ground, but once Sekiya's introduced it becomes much more engaging. Some recurring plotpoints involve trying to create order and control in the face of a panicking mob, people taking advantage of the chaos or acting out of a sense of desperation, and trying to deal with the limited supply of food and water. It maintains my interest all the way up through chapter 18, which is the ending of the storyline involving Nakata. I was sorta intrigued by how the following story (ch. 19-24) was going to develop, but it ended up being one of the most sigh-worthy of the "Sho's mom" resolutions. And after that, it just piled on crisis after crisis for a bit until it settled into an admittedly interesting story about spider-y mutants living in the subway tunnels. But the resolution to that story was one of the most anticlimactic.

In addition to that, this is also where the manga decided to stop being a mystical fantasy with psychedelic undertones and instead become a PSA about environmental responsibility. We get Sho's mom randomly (and disconnected from the plot) lamenting how Tokyo is a concrete desert (ch. 32) and lecturing a stranger for being wasteful (ch. 36). We get some of the kids asking questions like "Who did this to us? Why didn't they leave us anything?" (ch. 34) and "Didn't they care at all about our future?" (ch. 39). And we can't forget that the author seems to support natural eugenics, by which I mean letting the weak die off. One of the main reasons given for the fall of humanity was that they preserved the lives of those with bad genes, those "which should have been weeded out" (ch. 31). During this time, the story also seems to try to lean into its more science-fiction elements and create a concrete explanation for what's going on. But I'm not sure if science--if it's even appropriate to call it that--works all that well within this story. Many things are still left entirely a mystery (like Princess's extreme aging) and the more mystical elements (changing reality through willpower) are there and central to the plot even at the end, so I can't help but wonder if the story would've been better without any attempts at explaining how or why they traveled through time.

A lot of the backgrounds are drawn well (though the sand and rocks look sort of liquid) and if the characters' movements and facial expressions didn't look so stilted, the art would be pretty good. But some of the children's faces don't look horribly child-like. And the running looks like their jumping hurdles or something. You can't just draw action lines behind somebody doing the splits and call it good. Also, the tears and the open mouths whenever characters are yelling or screaming aren't drawn very well. And probably 90% of this manga consists of running, crying, and yelling, so the fact that those are the worst drawn aspects of the art is kind of a big deal.

The 44th chapter is an unrelated oneshot called "The Wish." It's a decent story about a boy named Hitoshi who was lonely for a friend, and so fe made a doll to keep fem company.

It's a really well done 70s thriller manga like yeah the teachers were rather scummy and all the kids just want is to be reunited with their families. This has really good original storytelling from Umezu-san and would recommend to ppl to check this out even if it is old stool! 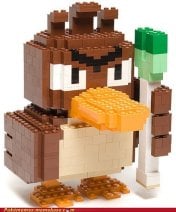 Hey y’all, Jim here with a brief overview of one of my favourite horror/survival manga “Hyouryuu Kyoushitsu” aka The Drifting Classroom. Released all the way back in 1972 by Weekly Shonen Sunday, this piece of art is written and illustrated by Kazou Umezu who is also known for his other works such as Orochi: blood and “Kami no Hidarite, Akuma no Migite” aka God’s Left Hand, Devil’s Right Hand.

Drifting classroom centre’s around a sixth-grade boy named Sho, who, after a heated argument with his mother, heads to school like any other day. After what seems like an earthquake hits the facility, the school and all staff and students are transported to a barren, post-apocalyptic wasteland. As panic sets in, the staff lose their sanity and start hoarding food and killing anyone that gets in their way. It is up to the students to protect themselves and take back control of their supplies and their school. As the dust settles, the students have regained control but at the price of being the only ones left alive. It is now that the real struggle of survival begins with outside attacks from megafauna and mysterious illnesses to internal struggles of descension and munity, all whilst trying to make sense of how/if they are able to make it back home safe. This manga is not for the faint of heart and shows very graphic scenes of young children fighting for their lives and not always being on the winning side.

It also brings up the philosophical elements of society and the creation of a quasi-government made up of children being able to tackle overwhelming problems with limited supplies and knowledge is very reminiscent of Mustafa Sherif’s highly unethical Robbers cave experiment of the 1950’s.

Being released as a weekly serial worked well for the pacing of the story. The suspense is very intense and the action is nonstop so it really feels like the children do not a moment to rest and are always on guard for any new threat that could come their way, but the manga is still able to tell its story without slowing the flow of action and horror.

This manga is available fully translated in the West, being published under VIZ Media since 2009. I would defiantly recommend this to anyone that enjoys horror/survival manga with supernatural elements.