The Devil is a Part-Timer! (Light Novel) - Reviews 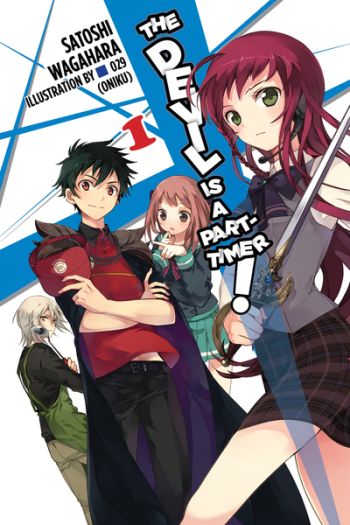 Finally after 2 month i was able to catch up on Yen On release of the Devil Is a Part-Timer!, so i was thinking maybe i should write my thought on the available 13 Volume in English. i will try to make it short (because who want to read a big review full of words) so i will dived it into 3 point : positive and negative of the LN so far and some neutral point that i still can't decide if they are good or bad. and i will leave it SPOILER FREE

Well that's what i was able to think of right now, i will edit and add when i remember more note-worthy thing.

as an extra thing i will add a tiny summary of each volume:

VOL 1,2,3 you will feel like WTF the link between all those 3 volumes, they follow the same recipe x

VOL 4 we start to see some hints, again follow the recipe x

VOL 5 now you will start to see some links of the previous volume, more hints again, AND follow the recipe x

VOL 7 short stories, worth reading don't skip it since slice-of-life is one of this LN enjoyment

VOL 8-10 YES BABY, finally some spicy volumes, they act as one Arc since they are linked together and the conflict didn't get solved in one volume (but in reality from vol 1 to 13 and even after i suppose count as a single arc or Saga at least for me), some good backstory. Those volumes that made me appreciate the previous one and commit to the rest of the story. i am not gonna say more than this, i may heavily spoil you.

recipe x is simply: the volume start with slice-of-life event, then some middle part that serve as changing the volume gears then we get the antagonist of the volume, and the conflict that come with this antagonist get solved in a way or another. PS: but in reality nothing is solved if you dive more in the story 3:)

OVERALL do i recommend this series? YES I DO. But put in mind what i said before in the negative and neutral part, this LN need commitment to it and a very long breath. and for sure you will reach a volume that will catch your interest and make you want to read more (for me it was vol 5 that started a bit to pick my interest then vol 8-10 that literally made me want to stick with this LN)+don't drop this series because of a character (especially Emilia, since through the event and time every character start to change and kinda grow + Yen On did a good job on this LN, good translation with no noticeable mistake (only for 2 time i think, in 2 different volumes instead of writing Emeralda there was a mistake and wrote Emilia, which the mistake is clear since it happened after a parole )

(sorry i ended up writing a lot, but i made sure to divide thing as much as possible to be easily follow each part)