The Demon Prince of Momochi House 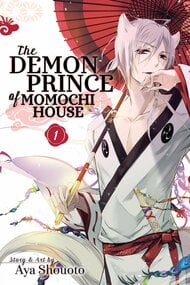 On her sixteenth birthday, orphan Himari Momochi inherits her ancestral estate that she’s never seen. Momochi House exists on the barrier between the human and spiritual realms, and Himari is meant to act as guardian between the two worlds. But on the day she moves in, she finds three handsome squatters already living in the house, and one seems to have already taken over her role!

This review stops at the beginning of chapter 5 because I honestly couldn't waste any more time reading on. I can definitely say this manga is not reverse harem. The relationship is set up to be Aoi and Himari with the other two characters honestly just supporting Aoi. It's all a tad stereotypical. Himari needs to rescued over and over and is thus saved by Aoi over and over and eventually falls in love with the guy. Aoi is, of course, obvlious. Also not too sure why he insists she "not see this form" and even when he kindly asks not to look she's blatantly staring in the next panel. He's also randomly bare chested, a lot.  I really did like the art style, the characters are all very attractive but it leaves you wondering "What the hell did I just read?" After 4 full chapters all I can honestly summarize is "She's in trouble. Aoi to the rescue. Oh Aoi's shirtless. Ah, she's in trouble again because she didn't listen. Wait, why is Aoi naked? Aww, that's cute, Aoi has no boundaries (like we haven't seen that before). Now she's all flustered. Needs to be rescued agai... UGH WHY AM I READING THIS?!" It's pretty much a knock off of Kamisama's Kiss and I highly suggest you read that before even considering this.

First off, let me say that this manga really does NOT resemble Kamisama Hajimemashita in any way, and this is coming from me; a complete addict to Kamisama (I've rearead it a dozen times. I have the anime, I have the merch... ect.) Kamisama is, no doubt, the better series, but to compare the two is like comparing Inuyasha to Bleach. Some elements are the same, but it's still comparing apples to oranges. Before you dismiss this as a Kami Haji ripoff, at least give it a shot. I honestly liked it, and maybe you will too! OK, with that out of the way, let me actually review the series. Story: The story is... pretty good. Not great, but certainly interesting enough to keep me reading. The basic rundown is that  Himari finds a will left by her parents that tells her that she is to inherit the Momochi house, but when she gets there, there are already three people (Demons, rather) living there. From there the story is a sort of mystery-romance between Himari and Aoi, who accidentally inhertied her birthright as the Nue, the protector of the house. My biggest problem would be that I felt that the relationship between Aoi and Himari developed a little quick for my liking, but since the rest of the story is supposed to have their relationship being a central driving factor I can see why it was done in that way. I also like the concept of the house causing everyone to forget the existence of the current Nue. It really makes for some good drama and tragedy. So yeah. I liked it. Art: This may be one of my favorite parts of the series. I'm a sucker for pretty art, and this certainly does it for me. It has an airy quality that I really enjoy whenever I see it. It's detailed and pretty, but no so much that it's overwhelming. Overall it has a sort of dreamlike style to it, and I think it works in the series' favor. As stated before, I have read Kami-Haji before, and it's one of my favorite series of all time, but in full honesty I much prefer the art for Demon Prince. Take that as you will. Characters: Himari is a pretty stereotypical shoujo protagonist, which I suppose is the point, since she's supposed to be just an ordinary girl who stumbled into the world of demons. She's not especially unique, but her personality meshes well with the story, so really it doesn't bother me too much. Aoi, on the other hand, is a pretty good male lead. Throughout the story you can't help but feel sad for him, and really hope he gets a happy ending. He also acts pretty believable for someone who has been living isolated from human society for a good portion of his life, and I appreciate that. For example he still has a lot of childlike behaviors and beliefs, such as not understanding why sleeping with a girl is innapropriate, or thinking that marriage immediately comes after dating. It's cute really, and I just wanted to hug him. (Side Note: Aoi's Nue form is what a lot of people immediately compare this series with Kami Haji for, and I think that's a bit unfair. Visual similarities aside, there isn't a whole lot of similarities between Tomoe and Nue.) In conclusion, I like the series. Maybe it's just my own hopelessly romantic heart saying it, but I truly do think it's a sweet series that fans of the supernatural romance genre should give a chance!

Okay, so here's the thing; this manga probably isn't completely terrible, it's about average in all accounts, but what makes me rate it so low is that it is unashamedly a rip off of Kamisama Kiss (Kamisama Hajimemashita). And I mean NO SHAME. A poor girl who lost her family who is suddenly given a shrine? The white haired fox-yokai dude? The white haired snake guy??? Already the first chapter in and almost everything is copied from Kamisama Kiss and they don't even try to hide it. Even the art-style in certain places reminds me of panels from kamisama kiss, and it feels insulting to read for someone who has read and watched Kamisama Kiss. If you are fine with this then go ahead, but it's pretty average anyway and you would have a better time reading Kamisama Kiss instead because it's much better. So long story short, it's average in about every way possible, but I did rate it lower for the blatant copying.