The Country Is Saved! 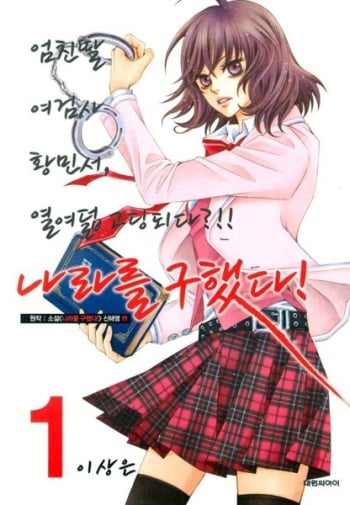 Yuuki Tsumire was raised by her single mother, who always told her to keep smiling, no matter what hardships she endured. The two of them were a family, until Tsumire's mother died from illness. Tsumire soon learned that she had a family she knew nothing about: a cold, rich family that disowned her kindhearted mother when she became pregnant. Tsumire now must go live with this family, even though none of them seem to want her there. To her surprise, the Yuuki family lawyer, a young man named Hino, soon becomes her emotional support in this difficult situation. However, Tsumire's reactions to him might mean that she wishes he were something more...

In a futuristic world, teenaged Boris is annoyed that his cute (yet strange) classmate Yuri Angel has created a robot that looks just like him! His plan is simple: revenge! He steals the automaton and takes its place as a servant at Yuri's house. But now Boris has no idea what to do next!

An energetic, cheery high school girl named Garam was having a peaceful(?) school life until she runs into a cute boy name Lime. Trouble started as Lime and his best friend, Yuyi moves to her school and monsters start showing up and she's the only one around who can see it. What's more, Lime happens to be a prince from another world who came to this world to find his missing bride who he doesn't even know the face of. As time passes, Lime starts to feel weird around Garam... And Garam feels the same except that it wasn't toward Lime but to Yuyi...

The world has became a place dominated by males. Women are virtually extinct with their number-count in the hundreds and the youngest of the them in her forties. It has been long accepted that a wife, being a gender so rare, can have multiple husbands. Sex change to satisfy sexual desire is a growing phenomenon, although is still looked down upon by society. In such a disordered place where she is the only girl, Ho Su awakens.

The only Angel Princess of Heaven is betrothed to the Emperor of the Underworld. Unable to accept her future with the Demon King, she realizes that her only choice is to run away. Her plan is to join the human world disguised as a schoolboy! Now all of the Gods from Heaven and Hell are searching high and low on the earth trying to make sure that a wedding happens.

Due to some unusual circumstances, Yutaka, a popular university student, often called a miser, raised by his strong sister, is an acquaintance of Rika, the owner of a host club. And then he meets Ritsu, the number one host at that club, and Kirishima, a lawyer who's also a customer who adores Ritsu.

Yvienne Magnolia lives in a small village and her beauty turns the villagers' heads, yet she would never have imagined the grand future destined for her. Because a count tries to kidnap her, Yvienne flees to the Lowood Institution for wizardry and witchcraft, forced to leave her family. In the school, she meets interesting people, like January Lightsphere who comes from a noble but peculiar family, or Lariatte, an heir to an orthodox fighter family, who might yet become her closest friend.

Ha-Ru is the daughter of a family that rules a remote island. She is also the heiress to this secluded land, something that Ha-Ru's half sister, Mi-Ru, resents. When Mi-Ru becomes upset and runs away, Ha-Ru follows her--and they are magically ushered into a foreign desert! And in this magical land, it's survival of the fittest!Da-Mi Seomoon's action-packed fantasy series is filled with fashionable young ladies and hot, mysterious young men!

One day Taku and his sister Tamaki find themselves on a foreign planet called Slaffleaze. The planet is ruled by the more intelligent creatures, who are led by Zolba (in the name of the king). Zolba plots to invade the world they know as Capricorn (the Earth) to obtain more power. Taku and Tamaki have to stop him before Zolba opens the way to the Earth. In order to do so, they have to gain the trust of Mona, the last remaining member of the Yappi clan, who is the ancestral guardian of Slaffleaze.