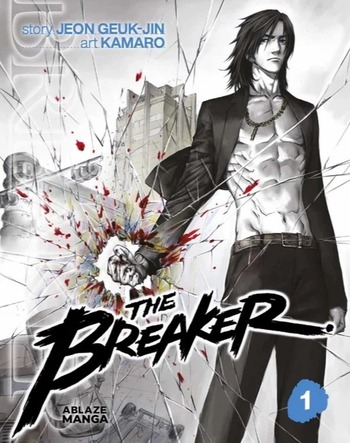 This manhwa is pretty awesome it has a great plot with good drawings, the style of the story feels almost like a Japanese manga, and like all Korean manhwa starts as a long thin strip and converts to the easy to read "manga" style. This had a great build-up and a very good cliffhanger finish. Spoilers from here on.

Shioon, who is the protagonist, is a victim of consistent bullying, pushing him to the limits of his rationality, and is on the verge of committing suicide. He sees his teacher(Nine Arts Dragon-NAD) fighting with some bouncers in the city while walking around and begs him to teach him how to fight. He finds out that he has almost no Ki in his body and is told that he really can't do much in the state he's in. The nurse(Shi-ho) calls him over to her house and gives him a magical ball, she tells him this will help and is the key he needs actually practice this crazy martial art his teacher know. This has the dual ability to have him perform these amazing things and uncontrollable ki. To make a long story short NAD challenges the Alliance and Shi-ho gets shot to death NAD goes berserk and destroys Shioons ki center, and banishes him as his disciple. Then onto New waves which is just as good. Read it, read it now. 3-4 times it's worth it.

the story is good but, badluck strike at critical point? i'm fed up with those scenario...

art is fine but i prefer colored.

characters? this is where it falls... there is no saint who will just let go of the person who bullies you over and over with just one punch... (make it more realistic)   if someone tried to rape your love, would you still stay prideful???    its just stupid act.....   there is a limit on how a person reacts....   its fine if its mercy for the ignorant and forced but for the cruel and stuppid to bully again and again and touch your reverse scale is stupid to let go.....

the fact that every badluck comes at critical point makes the story somewhat degrading and so much boring..... and i'm disapointed with how the story proceed....

protagonist: sensei why have you turn into such terifying form?
seriously??? is the protagonist stupid?   like he never felt enraged and nearly killed...  are you really asking stupid question when your lover was killed? and the most stupid part is when the main culprit was forgoten.... once is acceptable, twice is unbearable....

condolence to the retard authors...

This honestly doesn't feel very different from your average shounen series, and yet somehow I found myself completely captivated by it. The characters, the story, I was just completely drawn in.

Breaker, as I'm sure you've read in the synopsis, revolves around martial arts. A bullied high schooler discovers his new teacher is actually a powerful martial artist, and begs him to help make him stronger. The story focuses on both the teenager's efforts to become stronger, and the problems the teacher himself has because of his incredible strength.

The story does feel a little bit rushed, and it's not the most original story, but I thought it was told very well, and I enjoyed it a lot nonetheless.

I honestly don't know why (not very useful, I know), but I found all of the characters very endearing. I think they managed to give them all quite a lot of depth, especially the main two, and the character development is very good as well. The teenager is at first a weakling and a bit of a coward, but over time he gets stronger - not just physically but mentally as well. The teacher as well develops a lot as he gets closer to the teenager. The development feels very natural as well, which I think may be part of the reason I care for the characters so much.

I'm still not totally sure why I like this so much. I think if you like martial art manga, shounen in general, or just want something exciting to read, you'd definitley enjoy Breaker.

Just a warning though, it may say that two seasons of it are complete (they are), but there is meant to be a third season. If, like me, you like starting the story when you know you can read all of it, I'd wait until the third season comes out.

This is like GTO but adding a lot more classic fight scenes and even tho Chun-Woo is a bit of a**hole, he really is a badass funny lad that I've ever come across in the manhwa world.

Definitely guys, check this manhwa out for the lols and fight scenes, you're totally missing out!

You can enjoy this even if it's not colored. I love the art. The protagonists are not annoying or boring. The antagonists' are well written. The story is enjoyable too even though you might see it as a typical martial arts story, but it has sometihng that will make you read more.