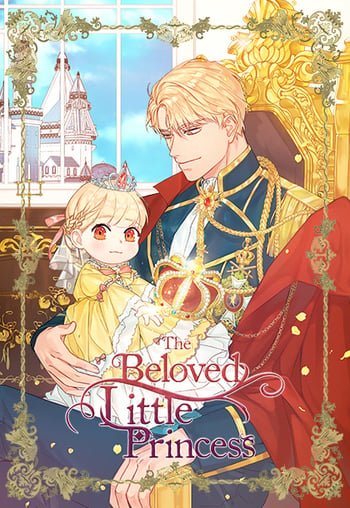 Yes,I love this type of anime in any way when it come to any romanance at all love it towards the eotion.

They got doting daddies who didn't like them at first. Then they seduced them with the power of daughter my love and warmed up their icicle hearts.

They both start with the isekaied character as a child. They both let you see them growing older and dealing with different situations.

Both are very determined to survive in the new world at all cost.

Oh yeah their dads may be badasses but they are eye candy too.

Not only is the story base the exact same where the main character is a baby that was reborn. But the story's are both with nobility and royalty. But as well there is 2 loving brothers in both story's.

they are both reincarnated as a baby eventhough the girl in ladybaby wasn't anything special before she died,she received the power that no body has ever had before and the princess in the youngest princess was already a powerful maage before.But the most cutest things is that both of the reborn kids were pampered by the people around them.

Both main characters are grown women who suddenly find themselves as babies and charm their families with their new cuteness. Both are working to protect those that are dear to them from looming dangers and intrigue, though so far this has been better set up in Lady Baby. Both main characters have cute relationships with their older brothers that are charming, though Youngest Princess puts more focus on the father daughter relationship.

They Say I Was Born a King's Daughter

A murder victim is reborn, fully conscious of her past life, as a king’s unwanted daughter in a new world where despite the end of all wars and advancement of science, misogyny reigns.

they are both about an mc whos reincarnated as a princess who has a dad and 2 older brothers who are insanely strong and feared by the people. The mc gets the family to like her and they do anything to make her happy.

both daughter character all have their fathers/brothers wrapped around their little fingers!

it's super cute to see them go crazy over the MC's cuteness!

Both these stories have almost the same contents, the actual story and plot may be different but the I need my family of crazy dudes to love me so I can cute, with the brothers andwand father's that are the same in both stories and similar protagonist.

If you're looking for a princess with crazy family members then I will suggest this manga it is good and it's so similar to this manga that its almost crazy only thing that's different is that she has memories of her previous life and she goes through less trial and error. It involves Magic and early childhood action and if you don't like Romance then in the first 32 chapters that aren't any well not much. I was really glad that I found this manga I suggest that you read it as well

Similarites between Youngest Princess and The Twin Sibling's New Life

They are both royalty,

both rememember their past lives,

live in a castle,

both have an over-protective father,

While the youngest princess is, in my opinion not as good as the twin siblings' new life, i agree that they are very similar and share good qualities.

(Their plot is alike in many ways, many listed above, if you do not know each stories summary, then please click on the cover pages of each novel to look at it to get a better idea. AKA too lazy to write)

I also believe that if you have not, you should read The Twin Sibling's New Life, if you wanted a reccommendation from the Youngest Princess, as it varies unique differences from the same old reincarnation stories and the novel is cute, and you can get along with the characters and sympathise them more so than others in different mangas. It is very interesting, and presents more sides to the story than other mangas. The Youngest Princess is also a nice read as it embarks how princess wrinkly is not afraid of the king and daring brothers. This relates to the Twins, arhen and arien, as they are also experince the same sort of relationship, while it is not all the same the siblings play a big role in both characters developments. Despite my critical reveiws both novels are good and i reccomend both.

These are only my opinions

Cuteness is there and the dad in both manga are both crazy over their daughter.

Also, both manga's storylines are really interesting. in Daughter of the Emperor, it delves into the background of why the dad is how he is and what the existence the MC represents to the dad.

As for the youngest princess, there's less chapter to compare but the storyline seems decent for now.

Both focus on an adult woman who is reborn as the infant daughter of an emperor and has to survive in her new circumstances by charming her father. The emperor in both is a doting father who is ridiculously extra when it comes to his daughter and is a bit trigger happy (or I guess execution happy).

Charlotte and Her 5 Disciples

Magic grants what the heart desires… at least that’s what the grand sorcerer Charlotte Eleanor always believed. Charlotte saved the world while also forming a following of five disciples to learn her magical gifts. Despite all that, she still couldn’t find the true love that her heart desires. Now, after her death, she’s been reborn into Aria Lisen! With the help of the Grand Duke Louister, can Aria finally find her true love, while keeping her new identity a secret from her former disciples?

they are in the same world

Both have the same characteristics:

• Both reincarnated into a (cute) child

• The MC is loved and respected by everyone

The unparalleled girl Liang Xi is the illegitimate daughter of an important official. The official takes Liang Xi back to the residence after the death of her wife. The elder daughter Yu Yan is jealous of Liang Xi's beauty and talents and orders her subordinates to sell Liang Xi to the brothel. But fortunately, she was rescued. Yu Yan is even more jealous of her and plots to get rid of Liang Xi. It is a gorgeous court story, in the Forbidden City filled with schemes and plots, love and miracles surge…

they are both about a princess who is adored by her brothers and father a lot.

both the fl are loved and respected by everyone

I Stan the Prince

When Angela's popular fanfic garners the attention of the royal family, she ends up arrested for treason! Her story improves the First Prince's image, however, and the royal family decides to use her for their political advantage instead. As she and the prince awkwardly clash with each other, they somehow find themselves growing closer...

Despite having been trained to be the next duchess, Lamia Orphe decides to become a knight. Meanwhile, the first prince of the Kingdom, Ethan Taylor, and the second prince, Aquila Theodore, are engaged in a battle of the throne. Why does Lamia keep waking up crying? How could her fate, both present and past, be intertwined with the two princes?