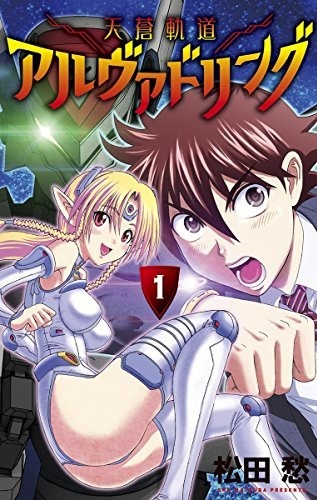 At the Nerima Ward Ooizumi Academy Photonic District, the Robot Girls are selling "Photonic Energy', a new type of "cheap and green power." The lab's research has been going nowhere and their government funding's been cut off, so their finances are a mess. Just when the three robot girls are bored out of their minds, the part-timers they hired arrive. They are Garada-K7, with her long pigtails, and Doublas-M2, who only speaks with the two hand-puppets she wears. But they soon realize that the two have come to stop them from selling Photonic Energy, and a battle begins.

To save the galaxy from impending doom, Cacao and Parfait are sent on a mission through time and space to retrieve the Fourth Warrior, Lamunes. Unfortu- nately, Cacao and Parfait discover Lamunes at the helm of the marauding Giga Genos invasion fleet. World by world, Lamunes is determined to bring the entire galaxy under his tyrannical heel. With the helpof a plucky orphan, it’s up to Cacao and Parfait to stop Lamunes from taking over the world.

A new enemy is here!?  Since Team Z is as useless as ever, the reborn Team G, Team LOD (Now with a new member), and the new kids on the block, Team Gai, all get involved in a battle royale! The fights take place at amusement parks, girls' festivals, and the spot that's at the heart of Nerima itself!  Will the girls be victorious?  And what of the unexpected dark horses, Boss-ko (Boss Robot) and Pan-san (Pantheroid)?  As dark clouds gather on the horizon, the countdown to every last one of them being banned from Nerima forever begins!

Nearly a year has passed since Lan and Muginami departed Kamogawa in the company of Le Garite and Del Metrio forces, respectively, and Madoka has been carrying on the Jersey Club banner solo while dearly missing her friends. Kirius, Izo, and Array, meanwhile, have taken to running a new beachfront café edition of Madoka's Uncle Hiroshi's restaurant. The continuing presence of Vox Aura (which has been entirely inactive during the interlude) on Pharos is still a powerful lure for both sides, however, for many believe it to be the key both to the destruction on Earth of 20,000 years ago and to preventing an eventual catastrophe for both Le Garite and Del Metrio. That brings Lan and Muginami and their Vox units back, albeit initially in conflict until Madoka can break through to them. But can she do the same when their big brothers, former friends and the respective leaders of the warring planets, also come back into the picture? They are not the only ones with long-standing interests in crossing the Rin-ne threshold, either, as other key players finally make their moves and reveal their true natures.