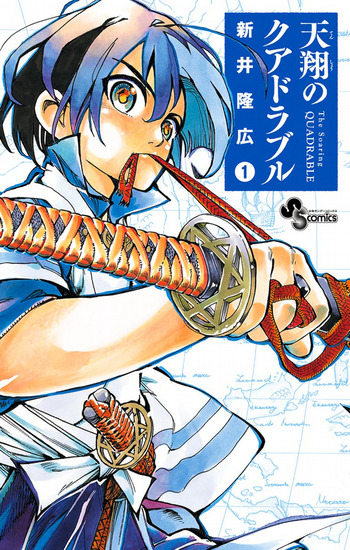 Two centuries ago, it was the beginning of the Industrial Age in Japan. Hiwou, Sai and their siblings and friends live peacefully in a quiet village and play with clockwork machines for fun, until one day a nefarious group called the Wind Gang attacks. Hiwou finds himself in the cockpit of the Homura, a giant clockwork doll built by his ancestors which the Wind Gang wants to destroy. With their home burned to the ground and their families held hostage, Hiwou and the rest must set forth to find his long-lost father and find a way to bring peace to everyone once more.

In the second King Arthur series, Arthur conceals his true identity in order to defeat Ziking as he and his four new companions begin a journey of adventures.

Hyakkimaru is a young man who lacks 48 body parts because they were taken from him by demons before birth, as payment by his father, Kagemitsu Daigo, to obtain his wish to take over the country. When the baby boy was born he was missing 48 parts of his body, and thus was abandoned—thrown into a river. Hyakkimaru has grown up and now has obtained fake body parts so he can eliminate the 48 demons that were made from his body, and to retrieve his missing parts. Along for the adventure is the boy thief, Dororo, with whom he becomes friends.

Giorno Giovanna is a young man that lives in Naples and is the son of DIO, the nemesis of the Joestar family. When he was younger, he was oppressed and started acting out, but one day, he saved a gang member and then learned how to trust people. Bizarrely, he never forgot that and learned how to be respectful with  his own gang that straightened him out. That’s also how he started aspiring to become a Gang-Star. Now fifteen, Giorno gets in trouble with the gang Passione, which controls the Italian mafia underworld, and now, he’s being targeted.

Mitokomon is the emperor's trusted man with a high sense of justice. He is sent to travel around the country in order to observe the quality of life in each province, run a check on the official's performance, and report back to the emperor. He travels with two bodyguards, Kaiko (known for his extraordinary power) and Tsuke (known for his amazing swordsmanship). The three men, traveling unknown, face adventures on their journey to bring justice to the citizens and eliminate corruption from the governing system.

Based on the adventures of Marco Polo, a merchant from the Venetian republic, who embarks on a journey to Asia along with his father and uncle in the 13th century.