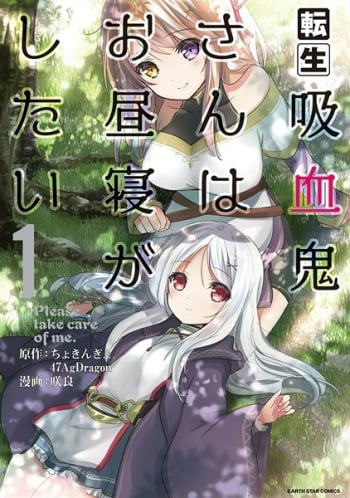 If you're looking for manga similar to Tensei Kyuuketsuki-san wa Ohirune ga Shitai, you might like these titles.

Sighing, leaning on his elbows, sleepy eyes. Tanaka-kun is a boy that basically doesn't try but isn't disliked. This is a laid-back youth comedy about Tanaka-kun and the quiet Oota who can't leave him alone.

both main chacters want to sleep all the time and somehow get people/friends around them to help :)

Both MCs are reincarnated into another world where "mmo game mechanics" seems to exist. In Tensei shitara Slime Datta Ken, the MC is a genderless slime, and can transform into a body of a girl, while in Tensei Kyuuketsuki-san, the MC is transformed into a vampire. Both of them are males in their previous lives. Both MCs are reborn with OP stats.

Basicly the same core emotions for the charicters chill and careless simalar air both caricters are also op and still no chlant about it.

Rucalt was reincarnated as the second son of an aristocrat after saving a girl from a runaway truck and dying. God bestowed upon him a cheat ability that allowed him to gain any skills he wished for. In addition, he could easily level them up with just a bit of use. By the age of three, he had gained the strength unparalleled that of all heroes in history. Nonetheless, he did not flaunt his powers, instead choosing to lead a life of freedom happily with his family in this other world!

One day, due to God’s mistake, Tomoaki Akino’s life was accidentally snatched away. Though he gratefully accepted the cheat offered as an apology and reincarnated, he was reborn as a female elf! Then time passed, and Tomoaki now works as the intelligent and beautiful receptionist named Ilya in the Luneville branch of the Guild Association. In a world of swords and magic, her job in the guild begins today.

One day, due to God's mistake, Tomoaki Akino's life was accidentally snatched away. Though he gratefully accepted the cheat offered as an apology and reincarnated, he was reborn as a female elf! Then time passed, and Tomoaki now works as the intelligent and beautiful receptionist named Ilya in the Lunéville branch of the Guild Association. In a world of swords and magic, her job in the guild begins today.

Banaza was summoned to The Magical Kingdom of Kryrode as a Hero Candidate, however, due to having only the abilities of a regular citizen, he was treated as a disqualified Hero. He, who was originally supposed to be returned to his original world, became unable to return due to the Magical Kingdom’s mistake, and inevitably, had to live in this world. However, the moment he became Lv2, Banaza acquired every attainable skill and magical ability, and he became a Super-Cheat with Stats that transcend normal limits! Even so, Banaza , who does things at his own pace with an easygoing smile, takes Lys of the Demon race as his wife, and fully enjoys his newlywed life. He then changes his name to Furio and leads an even more laid-back life! However, chaos is in store for the Furio household...

Due to an accident, a young 17 years old boy named Riichi Hourai is reincarnated into a succubus due to a misunderstanding by the Reincarnation Support Department. For a succubus to live, she squeezes out man’s life essence and must consume it but Riichi as a former man firmly refuses it and would rather die than do such behavior. Does a substitute for a life essence kind of food exist? There is! And surprisingly it’s milk!! However, There's no cows in this other world, let alone other races who drink milk. The Rehabilitation Support Department gave him a dairy cow under special circumstances, but he risks his own life raising the cattle who will become his life line. Moreover, It seems the cow wasn't just any ordinary creature?

Ordinary office lady Azusa Aizawa died due to overwork. For that reason, when she finds herself reborn as an immortal witch with the appearance of a 17-year-old, she decides to live an easy-going life. Her main source of income is collecting magic stones that drop off the slimes that live in the nearby forest and selling them at the nearby village's guild. After doing this for the last 300 years, she's unknowingly become a level 99 witch, the most powerful of all.