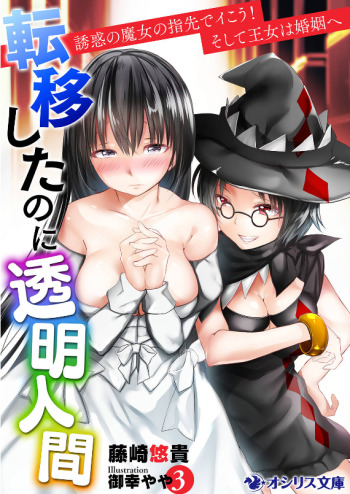 If you're looking for anime similar to Teni shita no ni Toumei Ningen: Seikou ni Michibikareru Oujosama (Light Novel), you might like these titles.

Though he spends the majority of his time wandering the vast palace or completing dull administrative duties, Hakuoro still occasionally finds time to kick back and enjoy time with his friends. While stealing food with Oboro, Hakuoro finds himself in trouble with an upset stomach and only one place to go – but who of the duo will go first? Meanwhile, Kamyu continues causing headaches for Munto after slipping out unannounced, but a dip in the bath with the girls will help calm the situation. But the mischief doesn’t end there! After being entrusted with one of Touka’s beloved dolls, Hakuoro’s over-enthusiasm leads to its beheading. Is there time to repair it before she returns, or is it time to pass the blame to someone else?

Supreme gods who have too much time on their hands create the ultimate "intellectual game" titled "Kamigami no Asobi." Reche, a former goddess, declares that she will find the most skilled human in this age to bring with her to challenge the gods in this game. She chooses a young man and rookie named Fey.

The story focuses on the origins of Lena Sayers, the mother of Arika Yumemiya and former bearer of Lofty Crimson Jade / Blue Sky Sapphire GEM, and Sifr Fran, the biological mother of Nina Wáng and the former queen of Windbloom Kingdom, as well as the origins of Schwartz, Aswad, and the Garderobe Academy and its Five Columns. The kidnapping of Sifr and the powerful revelation of Lena's GEM will soon fatefully determine the outcome of the future for themselves and the others around them.