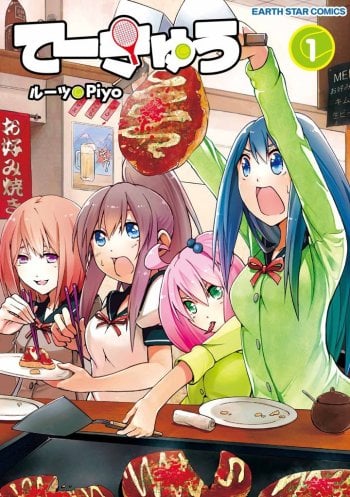 When Ageha was younger, she watched a tennis game and was affected by a passionate young tennis player. Years later she was determined to become the number one tennis player and to join the tennis club in her new high school.

Maguma is obsessed with baseball; in fact, his dream is to hit all the strong fastballs on earth. However, Maguma isn’t a good team player and doesn’t actually have any interest in joining the baseball team! Now, Meguma no longer gets a thrill of hitting a baseball at 140 KPH, so he decides to take up tennis, where balls can fly over 160 KPH! Will Meguma be able to handle this new speed, and will he be able to conquer such a different game?

The Manga Guide to Physics

Megumi is an all-star athlete, but she's a failure when it comes to physics class. And she can't concentrate on her tennis matches when she's worried about the questions she missed on the big test! Luckily for her, she befriends Ryota, a patient physics geek who uses real-world examples to help her understand classical mechanics-and improve her tennis game in the process! In The Manga Guide to Physics, you'll follow alongside Megumi as she learns about the physics of everyday objects like roller skates, slingshots, braking cars, and tennis serves. In no time, you'll master tough concepts like momentum and impulse, parabolic motion, and the relationship between force, mass, and acceleration.

Ryoma and the others (team members and teams they faced) begin a new adventure when they are the only 50 middle school students to be invited to the Japanese High School Representatives Selection Camp where only the top potentials in the Japanese tennis world train.