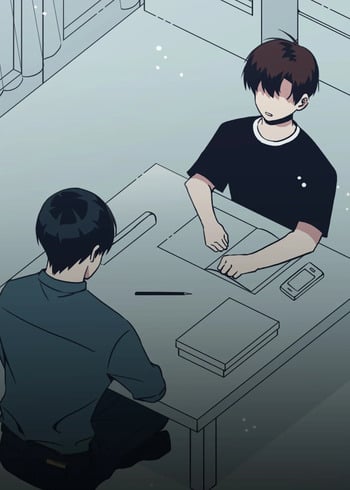 A man who has no luck in finding love goes to a renowned shaman after suffering countless breakups. The shaman says that the reason for his lack of luck is his best friend Dohyun. The two of them have to be connected by the string of fate for a month to restore Chang-ho’s luck. How will they survive living together?

Man on the Screen

Early one morning, Yoojin awakens bleary-eyed to a bright light… Did he fall asleep with the TV on? Surely that isn’t a real-life actor sleeping beside him? No, there’s no mistaking it. The dreamy TV star Ryu Se-ryeon is actually in his bed… and he REEKS of alcohol! How?! When?! WHY?! Perhaps it has something to do with Yoojin’s sister, who just happens to be Se-ryeon’s girlfriend. Sound complicated? You ain’t seen nothin’ yet…

Damwoon's sudden allergy to chlorine forces him to give up his swimming career, but when he develops an allergy to his best friend Haesoo, will he be able to give him up too?

Semin always stalks the social medias of his favorite internet personality, John. One day, he suddenly finds out that John is actually his classmate, Jo Yohan. Strange feelings are starting to develop in Semin's second semester of third year...

Everyone has memories of their first love, for Dongha, those memories are bittersweet. In highschool, Dongha has an unrequited love towards Sungwoo. Fearing the backlash and shame he will suffer if anyone knows that he is gay, he hid his feelings for Sungwoo. This is the story of Dongha’s first love, as he spends his days regretting to follow his heart. One day, he receives a novel from Sungwoo titled “Sorrowful Gyeongsang”. As Dongha starts reading the book, he gets transported in the novel’s fictional world and meets a different Sungwoo. Determined to not lose Sungwoo ever again, he plays along with the story of the novel but . . . Meeting his first love again in Gyeongsang era, will his unrequited love be fruitful this time?

A couple that has been together for 3 years, but dated even less than 100 days... And, because of the playing-hard-to-get Jaehwa, Dohyung is making a fuss. Dohyung wants to do something about it, but because of the naive Jaehwa, he gets really upset. However, the highschooler who lives on the 1stfloor is weird. Their story is all about being foolish and clumsy in front of love.