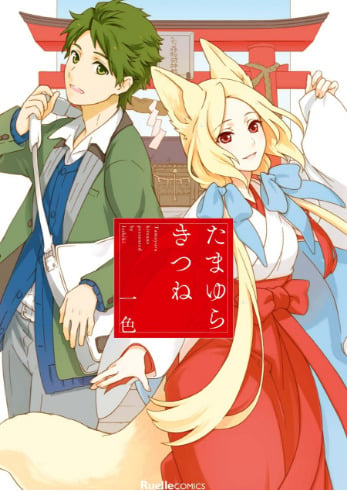 A subdued story about quiet grief. It includes probably the least cynical explanation for why aquariums exist that I've ever heard.

I love how Haine is portrayed. She has a crush on Yachi and wants to be a decent person, wants to be trusting and kind like he is, but can't help herself from feeling petty jealousy and distaste for Yuki--the object of his attention. This is a romance in the sense that romantic themes play a role, but the story itself centers more around Yachi coming to terms with his grief at the death of his grandmother and reaffirming the importance of his friends who are still alive. The story doesn't end on a romantic resolution, but instead on the idea that his grandmother's love will affect him throughout the course of his life.

Protagonist loves animals and his grandmother, they visit a shrine and there he meets a fox.

Some years later his grandmother has died and he is quite sad and decides to visit the shrine and the fox is there, but lo and behold the fox is actually a familiar capable of turning humanoid.

And thus begins his and hers daily life.

Sweet and nice short manga about humans and how animals also deserve to be treated like living beings.

Thoughts: Story is nice, Art is good and Characters are good.

This was actually a pretty cute manga. Sure, not the best, and definitley not the most original, but it's a plesant way to spend half an hour.

Warning, mild spoilers in the next paragraph.

The story is about a boy who loves animals. He used to visit a nearby shrine with his grandma, who sadly passed away when he was in highschool. While he's mouring for her, he decides to go back to the shrine he used to visit, where he discovers the fox he used see when he was there can turn into a girl.

I thought the characters were pretty well done in this. Not great, nor particularly memorable, but I did actually care what happened to them. They did feel like they had a little depth as well - not much, sure, but enough that they felt fairly realistic.

If you like short, sweet stories, or have an interest in Japanese mythology, then this would definitley be an enjoyable read for you.