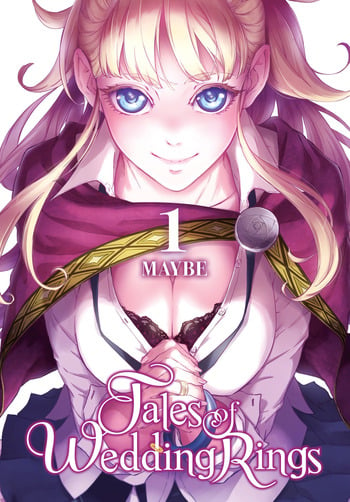 When Satou's best friend, Hime, tells him that she's moving, he decides to follow. After crashing her wedding in another world, he ends up as the groom when she suddenly kisses him! Prophecy states that her husband is destined to be the Ring King-a hero of immense power who will save the world from the Abyssal King! Is Satou up for the challenge, or is his new marriage going to end before it even begins?

TL;DR - You know, it's a shame that the story and characters suck so much because the artwork is absolutely gorgeous. But this manga reads like a perverted, middle-aged man fantasizing about stuff because he didn't have proper relationships when he was younger. ***HUGE Spoilers follow*** Story - 5/10 Okay, the TL;DR is really harsh. The story is not god awful, but it's nothing to write home about. Supposedly the main character met a girl and some old man in a white flash of light as a child, and then he was told to forget about it. Then it just conveniently skips 10 years to where he's a student and it turns out that this childhood friend of his is actually a princess from another world who was sentenced to marry somebody. And then he runs after her to the new world, suddenly has a ring pushed onto his finger, and then boom, he's the "ring king." God, what an awful title. Wasn't there anything better than "ring king?" Sounds like a Dr. Seuss character. Just... it's just lazy and too convenient. We have absolutely no chance to figure out what kind of personality MC has, and within all of the chapters currently released, these 'ring princesses" are just throwing themselves all over him. Why isn't this tagged as a harem?? I wanted a Romance. It's just really hard to take something like this seriously and enjoy it when you were recommended to read this from Horimiya, which is *such* a good manga. In fact, the 22nd-best ranked manga on this website as of 10 minutes ago.  Right now, it's just comically shounenesque, where the MC just travels to countries, basically collects these princesses and the rings (essentially adding to his harem), and the fight scenes are super short and lame. It's all about fan service.  Basically put, there isn't a ton of story here. You'd best find something else if you're looking for character development and a story that properly follows exposition -> rising action -> climax -> falling action -> resolution format. The format of this manga is jealous harem girls -> more jealous harem girls -> fan service -> even more jealous harem girls -> fan service -> tons of opportunities for MC to have sex but nothing ever actually happens.  The author is trying to tease you by waving something in your face and having you chase after it, but it's about as effective as if someone was waving a used dildo in front of me. Am I gonna chase after that? nah Art - 9/10 As mentioned in TL;DR, the artwork is absolutely gorgeous. The characters are *very* attractive, with tons of detail on both backgrounds as well characters, including clothing, eyelashes, eyes, hair, etc. In fact, I'm pretty sure the artwork was the only reason I kept reading this as long as I did. I've caught up on all of the currently released chapters, and I have literally zero interest in checking back to see when the next chapter is released. Characters - 3/10 First of all, I'm getting so tired of the childhood friend cliche in mangas and animes... it's an excuse to already have someone madly in love with our MC without having to put in effort on character development, and it's sort of garbage. You know, I guess it would actually be fine to use the childhood friend trope if the relationship was more complex and authors/artists started building on that. When you've been close friends with someone for 10 years, things sort of go beyond just "Oh, I think you're cute and I like you." There are little things that give them away, small glances or gestures or things, etc.... and there's zero of that complexity in any of the relationships in this story. Once again, girls just throw themselves all over our MC. Aside from him looking a little attractive, there's absolutely nothing else attractive about him. He's your typical, determined, overly self-righteous shounen MC. *sigh* Overall - 5.67/10 Maybe I'm being too harsh? I guess it's just difficult to come to this from reading Horimiya, which does just an excellent job of building on and showing the complexity of some of the relationships that occur between characters. I'm also tired of harems, because they're the dirty dreams of middle-aged men. You know, I don't know anyone in real life who has more than 1 or 2 people who actively pursue and throw themselves all over them. Love triangle? Perhaps. Love fucking hexagon? I'm done.

What catches the eye is gorgeous cover art. Love the art even if it’s not like the best ever. Especially having physical volumes it’s pretty good. This series is fantasy, isekai and more importantly ecchi/harem series. When it comes to the harem, I would say it’s the kind with the one chosen girl … and lots of other girls in various shapes and tropes. Initially the story seems quite simple, but after the main characters assemble the whole premise starts to get slightly complicated. I say slightly complicated, because there are hints on possible some greatness or rather say potential. It’s up to the mangaka in this case two guys, whether they do something with it or let slide and go for mediocre story. So far overall I would say the story is more like branch giving mainly opportunity to some romance, comedy and ecchi. On side note there is some action/fighting and possible destruction of humanity by forces of evil. What to say about the characters? The main protagonist is sixteen or so. At least he doesn’t look like dork and is somewhat athletic type of design. He takes the whole ordeal quite seriously, even if he initially jumps into it, because of his feelings for the main girl. Is his restrain towards the girls excused by the story, somewhat yes. The main girl is typical chosen girl and doesn’t stand out in a particular way. Other members of harem are built on other typical traits to cover different archetypes. There is shy innocent elf girl, strong and athletic warrior cat girl, cool android-like girl fully functional, spoiled girl kind of ojousama character and finally outside of the ring group the little sister of the main girl … for some oni-san moments. There are several other side characters, main antagonist is kind of mysterious so far not really much of character. Speaking of side characters, the interaction between the old wizard and his distant past romantic interest, who is elf and didn’t change in anyway is pretty funny. Japanese difficulty 5/10 (see my profile for details about various difficulty scores) Furigana is usually absent except in some rare instances. After all this is seinen series. The vocabulary is pretty average Japanese vocabulary. Aside from occasional page full of technical notes about lore the manga is mostly dialogues reducing complexity just by the nature of the media obviously. I wouldn’t recommend it to the beginners. However, don’t be discouraged with sufficient level of dedication any text can be read. Overall, it’s pretty decent manga for enjoying some high-culture 😉 art and plain Japanese language. Best of the both worlds. No regrets buying it on my part.