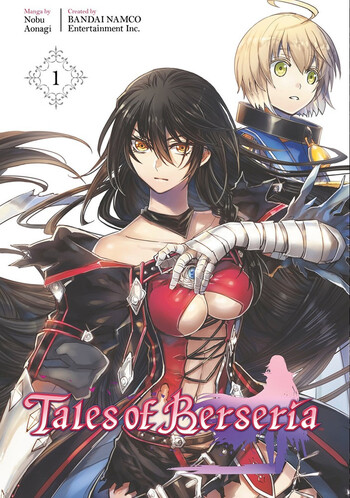 Foreword: Reviews are a highly subjective and personal thing. To find one that matters to you, you must find a reviewer who has similar tastes to you. Cause in the end of the day reviewing something for its quality is fairly straight forward. Its either good or terrible. There is no middle ground in that regard. So all that leaves is taste and personal opinions based on how much you enjoyed the thing. So for my opinions to matter to you dear reader you have to know abit about me. To say my tastes in a few words for your benefit. I love the Resident Evil and Monster Hunter games, I love the Transformers movies, I love metal/rock music, I hate more then anything in the whole wide world Avengers Fans Insulted & Betrayed Endgame but was a hardcore marvel fan up to that point. Now on to my review.

So this is Tales Of Berseria. A manga based on a video game of the same name. This manga is the first manga I ever read so it will now forever be important to me, and the game itself is what properly and finally got me into anime, before that I merely dabbled in the medium here and there. I decided to read this because I loved the story of the game but the gameplay was incredibly boring and far too easy for my tastes, I tried to force myself through it for the story alone because I liked it so much but when it comes to games I am a gameplay first, story second kinda guy. So I was very glad when I found out that a manga adaptation was made so that I could enjoy the story some another way.

The background lore of the world in Berseria is very intriguing, and the story explains it all in due time. Without spoiling anything its a fantastical story about demons, primordial deities and these human looking but not human creatures called malakhim. The pacing was abit rushed at times because they cut out alot of the minor character content and thus did not include it in the adaptation, I assume that the artist was given a limit on how many chapters he was allowed to produce. Now then while it certainly could have been alot longer then just 21 chapters they didn't remove anything vital to the plot so it is still very much enjoyable on its own. The first volume sets the stage, the second volume is build up, and the third and final volume is the pay-off. Its worth the wait though cause the ending was very strong.

The art is AMAZING, I thought all manga's looked this like this but then I checked out some others and saw that was clearly not the case. The artwork here is far above average standards and it is magnificent to look at. Very very beautiful in my opinion.

Velvet Crowe: She's a straight up badass, freaking powerhouse and total champ, she's angry and filled with hate, grief and so much pain, who can blame her? Can you say that you wouldn't feel the same were you in her place? I found Velvet's rage very relatable and never over the top or cringe. Some of the narrator dialogue was in the the beginning but her actual lines were great. I kept cheering her on internally throughout the manga that she would get her revenge and exact sweet sweet justice upon the evil man who stole what mattered most to her, and by extension all the denizens of this now equilibrium like society (if you haven't seen the movie you won't know what I mean but basically I mean "emotionless society") which only existed because of the her loss, because of her sacrifice, one which she was given no say in.
I have a quote here which stuck with me from the two Bersaria episodes in the Tales Of Zestiria The X anime. I apologize for taking something from outside the manga but I really feel it explains her POV perfectly.

"Yours is a world that would trade away the life of an innocent boy.
And you truly accept that...
This world was built on his life, and now you and your fellow exorcists fight because you want to protect it.
And I...
WILL BURN IT!"

Laphicet/Malak Number Two: He is a timid little boy who is all but dead inside, he was stripped of his emotions and was brainwashed to think of himself as nothing but a tool meant to be used by exorcists. His story is a very nice one, its slow going but the pay-off is worth it in the end.

Rokurou Rangetsu: He's funny and abit of a goofball, he has a mysterious past but he's quite open and social and would be willing to tell anyone all about it if they simply take the time to ask him.

Magilou: I liked her alot, she is arguably the funniest character in the manga and often likes to cheer up a dark or serious scene with her silly antics. Now remember everyone, whenever your feeling down do the MAGIKAZAM!

Eizen: A freedom toting pirate who fights with his fists.

Eleanor: A good hearted exorcist who has a strong sense of right and wrong.

Oscar & Teresa Dragonia: These two siblings have a nice close relationship with each other and I really enjoyed there side story.

All of the Tale's series of games have this thing called a "Characteristic Genre" what this means is that each game the developers make have a moral message laid into the very fabric of the game, I think that this is a very neat touch personally and Tales Of Berseria's one is:

君が君らしく生きるためのＲＰＧ
"RPG of Discovering Your Own Reasons to Live"

And that is true. Through the character of Laphicet/Malak Number Two we get to see that, we see a very relatable character finding his own reason to live and purpose in this world. Eizen has many memorable lines to say in this regard and they are quite neat.
I recommend this story for anyone who's looking for a cool anti-hero story with a badass female lead.