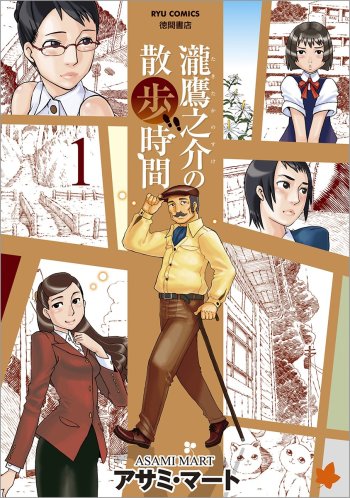 If you're looking for manga similar to Taki Takanosuke no Sanpo Jikan, you might like these titles.

Mishishi Karuke, 47 years old, the charismatic vocalist of the legendary visual kei band, "De Profundis." For he who has come to take captive the prisoners (fans) who live in the prison of darkness (present day), his eyes are now set on lifestyle planning for old age! He who smells of jet black roses is stricken with the body odor distinctive to the elderly! The lips that spin decadent phrases now desire green juice! The one who warmly watches over Mishishi who worries about aging is Kanaji the manager.

With Japan entering a new era, the story centers on Shiosawa, a former manga editor for a major publisher. After going into early retirement, he now finds himself wondering about what the world of manga means to him: is it work, a form of expression, or friendship?

Prequel to Yawara! A Fashionable Judo Girl. Published in an anthology of 4 stories about Jigorou and 2 other stories completely unrelated to Jigorou or Yawara. One of them is called A Bat & 2 Balls.

Kyouko lives next to her parents. She ends up taking care of her dad while her mom is away, this slice of life follows their relationship

Ichinoi, a 75-year-old woman living a peaceful life, unwittingly buys a Boy's Love manga one day...and is fascinated by what she finds inside. When she returns to the bookstore to buy the next volume, the high school girl working there--Urara, a seasoned BL fan--notices a budding fangirl when she sees one. When Urara offers to help Ichinoi explore this whole new world of fiction, the two dive into BL fandom together, and form an unlikely friendship along the way.

My Grandpa’s Stories Can’t Be This Weird!

Though its title logo resembles a certain light novel, and his younger sister is particularly cute, the student council president doesn't have any mystery to solve about it. It is just as it says, a comic about a grandpa telling his grandson a strange story. What is strange about it and why is something you'll have to read the comic to find out! You'll find yourself chuckling while you read, as you enjoy the charming world of this grandpa.

Inspired by Cervantes' Don Quixote, the author criticizes heartless individualism and indifference in modern Japan, as seen through the eyes of an old man, who, although childish with age, sees the truth of things.