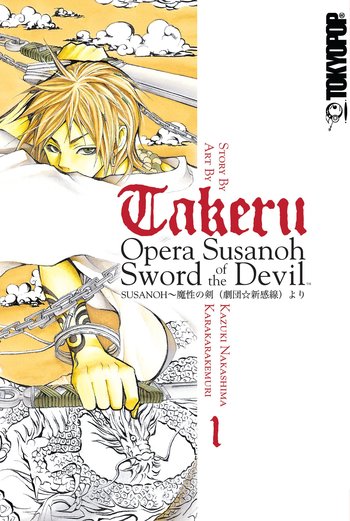 Three men named Takeru converge in the Oyashima islands, looking for the legendary Sword of Susanoh. After an unexpected chain of events the three – Izumo no Takeru, Kumaso no Takeru, and Oguna no Takeru – decide to band together in hunt for the famed weapon, though each has his own reason for doing so. Their first stop is the female kingdom of Jagara, where their destiny awaits…

Based, strangely enough, on a contemporary theatre play, this four-volumes manga I discovered by pure chance immediately caught my attention with its title (I was studying the Kojiki at the time, so reading two names like “Takeru” and “Susanoh” on the same cover was enough) and with its simple but interesting “sword-and-sorcery” premise. What I found is a small, hidden pearl, a shōnen manga that doesn’t need years of serialisation and a three-digit-number of chapters to develop an intriguing fantasy-action story.STORY: 7/10Even if not particularly original, the story, written by Nakashima Kazuki (who had already penned the original theatre play, besides being scriptwriter for, among others, “Gurren Lagan”), has such a skilfully crafted setting, progression and characters that it manages to intrigue the reader and keep them hooked up to the last page. The plot isn’t nearly as predictable as it may seem, with some twists both carefully prepared beforehand, keeping the reader guessing, and effectively pulled off feeling neither too out-of-the-blue nor too predictable. The setting mixes both typically fantasy elements and Shintō or more typically Japanese elements (the trees of the gods, the wordplay-based prophecies, the Earth spirits, possessions, the samurai, the four generals…). The story progresses at a really fast pace, without ever dragging along, creating a suspense and rhythm that never let up, but also, on the other hand, causing some plot points to be a bit confusing; some elements of the setting could have used some more explanation. Even if the emotional impact is not particularly strong, and if there’s nothing of particular depth going on, the manga is able to hold up and to captivate the reader by sheer charm, leading into an epic and ultimately satisfying finale: after all, all those who play RPGs and read fantasy books know that a sword-and-sorcery story, if done well and without relying too much on the devices and situations made famous by the classics of the genre, doesn’t really need that much depth or originality to be entertaining, because, some times, just your regular tale of bravery, adventure, epic battles and fantasy where the evil is defeated and the righteous triumph is really all that you need. In this view, “Takeru: Opera Susanoh sword of the devil” works great. The only serious problem I have is that the battles are a bit lacking, but I’ll get back on that later. CHARACTERS: 7.5/10The cast of secondary characters is pretty varied, and while never particularly original or deep, most of them have their moments in the spotlight, even among the villains, and thus their own space for exploration and/or development; be it by redeeming themselves in some ways, by showing an honourable moral code or valour, by showing their weaknesses and internal struggles, or simply by their charisma or the mystery around them, they all are interesting and charming in some way (some even quite unpredictably so), and maybe with the exception of the main villain (who looks like the kind of villain Wakamoto Norio would voice). Of the thee protagonists, on the other hand, only Oguna has a decent exploration and development (I wouldn’t call what happens to Kumaso a psychological development at all, but your mileage may vary here), and they could be easily defined as stock types; this nonetheless, the differences and thus the dynamics between them make them work perfectly; they’re likeable, charming, impacting, and easily the strong point that makes the story hold up so nicely. It’s good to see how such a short manga managed to create a cast of characters, even secondary ones, so consistently good. Certainly not original, but certainly good. ART: 7/10"Takeru” saw the debut of mangaka Karakarakemuri, who later went on to create “Replica”. Despite a very strong character design (especially of the three Takeru), some quite impressive weapons and some surprisingly detailed landscapes, her inexperience does show here and there, especially in the action scenes, which most times are confusing and hard to follow. Don’t get me wrong, for a debut it’s impressive, even some timeless masters of manga weren’t half this good in their first work, and the facial expressions are incredible both in comedic and in serious scenes, but I think that in this genre, where battles have such a big role and are such a bit part of the fun, the fact that they’re so confusing isn’t a small defect. I’m probably being too harsh here, I know, but… OVERALL: 7.3/10In the end, “Takeru” is a safe fantasy adventure full of interesting characters, with memorable protagonists, a nice setting, and an intense storyline. It doesn’t manage to be original (but hey, these days how much room is left for originality that’s not already taken?), but it doesn’t feel so “seen-before” either; it won’t bring you on the verge of tears or going “Fuck yeah!” in your room while reading it, but it won’t leave you unimpressed either. If you like “sword-and-sorcery” (does that term even exist?) stories, like the ones you’d find in an RPG videogame, do give it a try, being so short and fast-paced it’s worth a look. Far from a masterpiece, but definitely competent and definitely good. 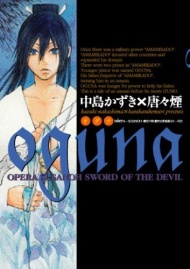