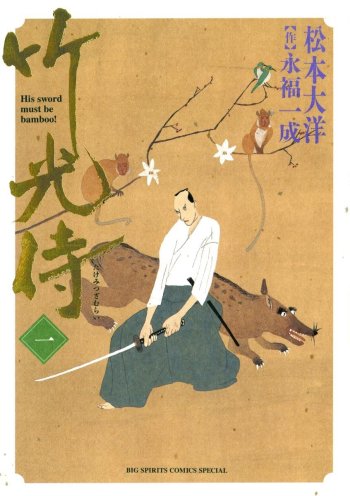 Masanosuke came to the city of Edo to prove himself as a warrior, but the man’s lack of confidence is so obvious that he’s perpetually unemployed and can barely afford to eat. So when the mysterious Yaichi offers him a job as a bodyguard - room and board included - the ronin jumps at the chance. But little did he know that his new employer is the head of the Five Leaves, a gang of kidnappers, and that his fees will be paid from the spoils of their crimes! Masanosuke never expected to find his home with a band of criminals, but as he grows more entangled in their world, his dreams of honor begin to fall by the wayside...

Two seinen samurai manga that favor slice-of-life over action (but still have some fights). Each has a unique art style (Saraiya Goyou has Ono's characteristic character designs and wispy look, while Takemitsu Zamurai evokes traditional Japanese woodblock printing and sumi-e/ink and wash painting).

Both main characters are ronin who are new to town, and possess odd, gentle natures that belie thier uncanny swordmanship.

Me and the Devil Blues

Down in the Mississippi delta, RJ has a stable life and loving wife, but what he really wants is to play the blues better than anyone around - a dream he'd be willing to give up just about anything to attain. One night at the juke he hears a rumor that if a man stands at the crossroads at midnight and plays a song, the devil will appear and transform him into an expert bluesman in exchange for his soul. Later, in a drunken stupor, RJ accidentally does just that, dooming his happy life. With nothing to return to, he sets off on the road where he'll face gangsters, a small prohibition town determined to lynch him, and the devil himself.

Takemitsu Zamurai and Me and the Devil Blues are phenomenal seinen manga about two men with literal inner demons.

Both intersperse moments of graphic violence and bone-chilling creepiness with scenes of normal people doing normal things. They're also very well-researched (both are historical), have some of the most finely-crafted plots I've seen in manga, and two of the best art styles as well (though they're at complete opposite sides of the spectrum).

In sum: Go read both of them. Right now.

"Stop your evil deeds and take the right path!" That is the creed of Youko Tama and her younger step brother, Jinka Sendou. The two demon siblings travel the country to stop the deeds of all evil doers, along with a scaredy-cat swordsman they picked up along the way, Hyoudou Shinsuke. During their travels, they will come across a monk organization with more than suspicious methods and they'll soon be at war.

Both are set in (a fictionalized) historical Japan and combine samurai-style swordfighting with the otherwordly. The characters give off a similar feel, full of depth and charm. These are stories that aren't purely about the action, but more so, perhaps, about the personal growth of the characters (epic battles notwithstanding).