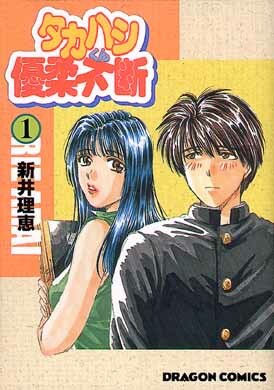 Whenever she sees a boy of her type, Ai gets excited and reckless. Because of this animal instinct, she hasn't had a boyfriend for fifteen years. However, Daiki, who is handsomest among students, wants to date her. She thinks that if she missed this chance, no one would be waiting for her any more. Is it her last chance!?

Souko and Yuki are childhood friends. Despite their youth, the love between them develops into a serious relationship. But the terrible secret Souko hides prompts her into later abandoning Yuki. Now living in a new town, Souko meets Hiroto whose friendship and gentleness coax Souko into once more reaching for happiness. Past wounds, the promise of future love, overwhelming passion and two men vying for the same woman. What will become of them?

For normal people, about one unfortunate event occurs in a 1 day period. But for some reason, it's different for Rinko. Unfortunate things seem to pile up one after another. All Rinko wishes for is to find some happiness in her life. With the upcoming New Year's celebration and a date with her best friend, Tatsuyuki, will her hopes and dreams be fulfilled?

Miwa wants to get romantically involved with him, but cannot. Soon she finds herself attracted to his father. A dangerous triangular love affair goes on.

Yukari and Haruhi are the same age while Ruka is 4 years younger and they are all childhood friends. The three of them get along well with each other, but unexpectedly Haruhi confesses his love to Yukari and the two begin dating. But, Ruka forcibly chases after Yukari causing her heart to wander between Haruhi and Ruka. Although she doesn’t want to break up with Haruhi who is nice to her, she can’t stop the heat that she feels when she is with Ruka… The everyday peaceful life has turned into a continuation of storms!

Rei, Kazuma and Banri are close childhood friends. Rei, who's better than any guy, the cool and smart Kazuma and Banri who's mischievous and bright have the perfect balance. It's normal for the three of them to be together all the time and without thinking of themselves as men and woman they're just together. But something happens after which Rei starts to think of Banri as a "man", so the relation of the three changes...?!

The cool glasses-boy and his two beautiful childhood friends have a delicate balance between the three....

Truly a Romeo-and-Juliet type of love story. Two opposing Mafia bosses' children, Elio and Yvette, are in love. The twist to the story is Yvette's brother is also in love with her!

A love triangle, a friendship triangle, an enemy triangle. Three friends placed together by fate to live out their lives.