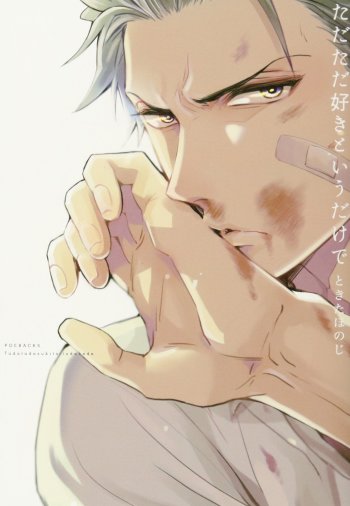 If you're looking for manga similar to Tadatada Suki to Iu Dake de, you might like these titles.

At a high school full of delinquents, Leo Shishiyama, a boy who looked cute but was the best fighter, is puzzled. Takeru Kurosawa, who had constantly challenging Leo to fights that ended up in a draw, has sent him an eighth challenge letter. Leo likes winning, but he doesn't particularly like fighting, and enjoys gorging on strawberry rice cakes, his favorite snack, much more. He tries to ignore Takeru, but bumps into his beautiful little sister on the street, who shows him kindness. If he can beat Takeru, maybe he can make a move on her! Leo faces Takeru, but who comes out victorious...?

Kudo, a young, cute, cultured, sporty guy joins a school that is known to be "full of Yankees," simply because it was right next to his house. At the end of the welcome ceremony he was cornered by a group of these Yankees, that's when the strongest student of the whole school, Taiga Kishimoto, appears, who soon makes them disappear in a single blow! He has an extravagant appearance with his blond hair and piercings, Taiga asks Kudo, with a big smile, to look for him if he gets back to problems. This strange alliance of charm and strength does not cease to disturb the last...

You Are My All

The delinquent Kusunoki admires one person - and that is an upperclassman from another school who saved him while he was being beat up; brimming with manliness (but physically small) - Hayato-san. Though large in both body and attitude, Kusunoki is completely submissive to Hayato. He becomes Hayato's underling and escorts him to and back from school, cooks him lunch, and thinks of Hayato all the time when they can't meet. Kusunoki realizes that his feelings are of love through his friend's remarks. Just being subservient to him is not enough, but he wants to do more with the cute and cool Hayato-san...However, his confessions are always being disturbed by Hayato's nasty friend, Misao, and Hayato himself, who is very simple-minded and pure...

Kyoichi's elite high school and the delinquent school next door are separated by only a fence. One day by the fence, Kyoichi meets Chiba, a fearsome student known for speaking with his fists.

First year Hino Teppei of East High has a lifelong enemy. His nickname is “The Demon of the West,” but his actual name is Onikubo…a second year whose goal in life is to tangle with East High students. No matter how many times he gets called out, he’s so strong no one can make a dent…and yet, he only has eyes for cute things! One day, Hino picks up Onikubo’s chick coin purse, and Onikubo thinks “that yellow nape of his makes me think of a chick”—and becomes attached to him!Furthermore, he’s able to go from “I don’t hate you” to a kiss…?!

During his third year in middle school, Yuya confesses to Ryo, a delinquent with a scary face. At first, Ryo doesn't respond to the confession and they keep hanging out as friends. But, when Ryo finally asks Yuya still likes him in high school, these two finally start dating. So begins their love story that spans from middle school, high school, college, and adulthood!