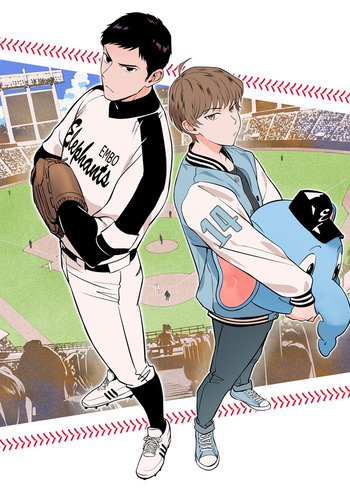 In order to get the headlines, the entertainment reporter Li Shu Zhen, secretly follows and takes pictures of the "Baseball World's Most Popular Superstar" Liu Xian. But he unexpectedly snapped a nude photo!? Later on, he discovers that Liu Xian is his former alumnus, not to mention he's the junior of the baseball department. Falling into deep thoughts, Li debates whether he should leak the nude photo. At the same time, Liu Xian proposed a secret transaction with Li Shu...

A (not so popular) idol happens to throw a ball at a ceremonial first pitch. And it gets clocked at 153km/h. Her new life begins?

Sung Moon High is fields one the country's top 5 high school baseball teams. On the field, players hit hard, run fast, and pull their weight to strive towards victory. Off the field, competition is fierce with students vying for position - and affection. Some might play for love of the game, others are just in it for love.

A mediocre baseball player, Jin-ha is a benchwarmer in his team. However, his life is about to change when he is given the Divine Bat from a mystical being.

Youngjun’s life’s been all about comparing himself with the Baseball Genius, Hyun; who totally set the standards for Yongjun’s baseball life 7 years ago. Youngjun hated him just a few encounters after. Insecurities were too strong to beat, and it was easier to doubt Hyun’s kindness and push it away. Hyun has never lived a mediocre life, and that was enough reason to hate. Although this time, Youngjun can’t take his eyes off of him, and Hyun has never left. After all, they are the Keystone Romantic Combo.

One morning, Akira Yamada, a baseball club manager who worked hard to clean the room before morning training, got kissed by a male student who had fallen down from a tree!!! The criminal who stole the lips of Yamada, who is serious and stiff and a pure baseball player, is the endlessly sleeping classmate, Niimi Asa. Niimi was penalized for arriving late to help out the baseball club and Akira was forced to chaperone him. After that, Yamada often became the prey of Niimi’s troublesome habits. He was hugged and kissed…and his innocent baseball lover heart was shaken. What’s more troublesome is the name Niimi calls while sleeping. It seems Niimi is having a physical relationship with his childhood friend, Kagerura Sho.

This spring, Tokyo TV's newly employed announcer Fukuro was given the task to gather information & do a close report on the infamous hunk of the professional baseball world; Shiratori Reiichi. Given this important opportunity Fukuro is determined to do his best! However, the following morning he wakes up to a stark naked Shiratori sleeping beside him, trouble ensues!

Yuuta and Ritsu have been playing baseball together since they were children, but after being defeated in a local tournament over the summer, they must retire from the high school team to study for university entrance exams. Still, Yuuta finds himself unable to give up his lingering attachment to baseball. The one person who can truly understand him is Ritsu, who has been acting worryingly distant since they quit the team. But there's something Yuuta himself doesn't understand... Does he think of Ritsu as his partner in the way that a teammate would, or is the affection between them something stronger?

A story about a baseball player who has an inferiority complex. His life isn't exactly smooth due to his indecisiveness and lack of raw talent.