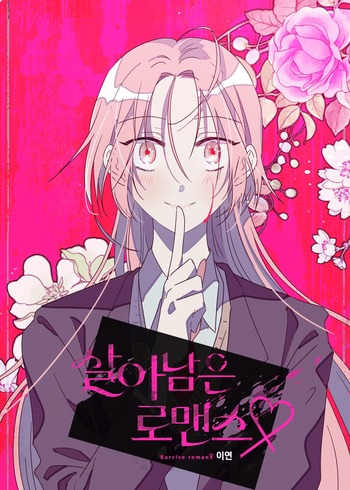 The story went from a base of romance with a dash of HORROR to oops I spilled the whole jar but unexpectedly it turned out great. The transition of mood in the first chapter was well done and it just keeps adding up and will keep you wanting more.

The art is a great fit for the story. The mixture of the pinkish theme that represents the original novels genre (romance) and the background characters being black and scribbled makes for a great contrast in how the twist of horror is handled.

The mc is literally the perfect fit for this, because of how she feels about the background characters (not even bothering to get to know them) we are able to see a darker pov.

Quite an overdue review here, but because of its steady development, I had to read more before making a proper review. However, it's an incredible manhwa balanced in all departments and has not disappointed with a single chapter. If you're looking for a suspense-heavy zombie thriller with enjoyable characters, then this is definitely the story for you!

The story begins with Eun Chaerin, the female lead of a popular romance novel who was formerly a regular person in the normal world. Although life in the novel can be quite unnerving at times, as she's unable to see anyone except the male lead, Chaerin is still content with her current situation. Being the main character of the story, Chaerin dedicatedly follows the original plot of the novel, up until the day of the male lead's confession. During that moment, the genre of the story abruptly changes, leaving Chaerin in a zombie-filled horror instead of a sweet romance. Just as she succumbs to death by zombies, she wakes up again, returned to the morning of the incident.

Chaerin, unsure what to make of the new situation, tries her best to prevent the zombie outbreak from occurring. But as she tries time and time again, the story fails to change and Chaerin borders the edge of insanity. That is, until she experiences a peculiar encounter, and quickly learns that if she wants to survive the new twist of the story, she must work with the extras she previously ignored.

Surviving Romance is a skillful showcase at storytelling, with incredible pacing and plot twists, all paired with just the right amount of suspense. The author takes the time to unfold the premise of the story, and explore the realistic physical and mental changes the main character goes through. And following a thrilling inciting incident, the story dives into an exciting development full of interesting conflicts.

Overall, it's just a wonderfully written storyline and I cannot wait to see where else it goes.

The art is spectacular, no question about that. The author's art style, a sparkly and colorful palette that makes use of bright tones, is such a refreshing take in a thriller/horror story. Unlike most horrors that take a dismal tone throughout the story, it's Surviving Romance's unusual style that makes it all the more engaging to read.

Additionally, the author's concept of the characters is wonderful. Each character has a unique appearance that's tailored to their personality and quirks, and anticipating each of the reveals is riveting. Just amazing art style!

The characters have to be my favorite aspect of this story because they contribute beautifully to plot development. The author's ability to create such a vivid personality for each character without even assigning them a face is wonderful, and truly have you invested in the revelation of each character's appearance. Each of them has distinct traits and abilities that contribute to both resolving and creating conflicts.

Chaerin's character in particular is engrossing. She's insane at times, selfish and considerate, manipulative and attentive. She struggles to balance her reality as an outsider, while also managing her persona as the novel's boy-obsessed lead. Her progression has been realistic and her journey as she tries to convince extras onto her side has been a roller coaster, especially with unusual tactics and methods she uses. The relationships she creates and molds with other characters throughout the story are delightful, and certainly make the overall story so much better.

The manhwa combines all aspects into a captivating thriller, and as the conflicts and conditions change, the way Chaerin and her classmates try to adapt is exciting to read. I cannot emphasize how well-thought-out of a story this is and if you're looking for a gripping plot with excellent storytelling and characters, this is the webtoon for you. I simply hope you're ready to wait with suspense every week!

Okay... First of all I never exprcted that kind of twist! It has one of the best shocking twist I have seen in any highschool romance story.... when I first started reading it I thought that it would be a typical highschool story with a hint of thriller genre. but there so much into it!! so far so good! the story looks promising. the most enjoyable thing for me is character unveiling! kinda like character hunt!
this reveiew is written up to chapter 8. i'm also really hyped to see the ML! no clue who he is except that chic bracelet.The art is good. the story's got soo much potential, characters are inresting what else do you need?! just read it!!!

edit: read upto chapter 19 love this one! love how chaerin isn't the only one who's op everyoone in her cls has importance. the worldbuilding character developement everthing is top notch.

The art is so fooking beautiful. I lost the count of times i skimmed through the webtoon just for the art! Also, the plot is just on a different level. At first, you would see fluff and cuteness, but damn, the unexpected plot twists makes you go over the edge. I would totally recommend this!

I'd massively reccomend reading this blind; it has a bunch of twists and huge plot moments and they're SO much better if you're going into the story with no information at all. I thought it would start off super generic, and it sort of seemed like it did, but that made the massive twist so much more impactful.

Beyond that I got nothing much to say. The characters are REALLY good. Not just good for a manwha but REALLY just amazingly well written. The story is somehow both funny and will make you cry, it's nice seeing the MC get her spirit back as she slowly survives this world she's stuck in; and especially when you find out WHY she's there. I really like when stories actually explain that too, a lot of isekai are like "I fell into this world bc of the mythical power of the semi truck." and that's it, but in this one the fact that she's fallen into this novel world and why and how it happened are core plot points (not gonna say more, bc potential spoilers.)

I REALLY don't wanna spoil anything. If you've read it, you know why; if you haven't then you should. This is one of like three manwha/webcomics that I still think about a long time after finishing it's first season; and that's out of like HUNDREDS of things that I've read, so give it a look.