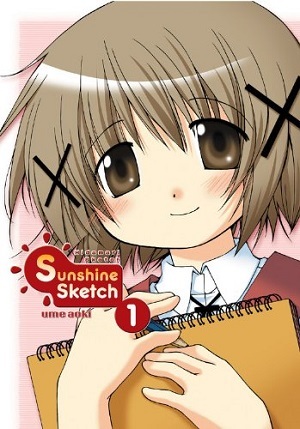 It's the first day of high school, and plenty of school clubs are doing their best to recruit new members, but for ditzy Yui, none of them seem to fit the bill. However, when she accidentally signs up to join the light music club, Yui begins a hilarious adventure to become a world class guitarist! There's just one problem: she's never played the guitar before in her life! Joined by bassist Mio, drummer Ritsu and keyboardist Tsugumi, Yui and the gang juggle their studies with buying instruments, learning how to read music and even performing in the school festival, all in the hopes of someday becoming a successful band!

These two manga or so similar that sometimes it's not funny. K-On! shares Hidamari's tone, halfhearted focus on a central theme (music in K-On!, art in Hidamari) and even the occasional character (Yoshinoya could be Sawako-chan-sensei's sister). If Miya and Yuno, Sae, and Hiro's antics make you giggle, you're gonna love Ritsu, Yui, Mio, and Mugi. 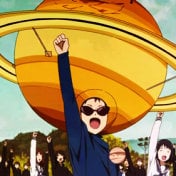 As mentioned in the above recommendation, these two are very much alike in plot (if you can call it that). I do find that K-On! focuses more on the characters in their club, while Hidimari Sketch focuses more on the characters off campus. I find the humor in both mangas to be especially similar, including the teacher's role, pun timings, character types, and the occasional obligatory yuri references. 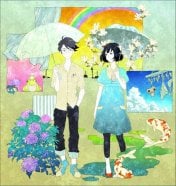 Azumanga Daioh and Hidamari Sketch are sweet little 4-Koma manga about unusual girls and their friends in high school.

The students of the Geijutsuka Art Design Class study all the various fields of art, from sketching and painting to graphic design and photography. While the mischievous Noda is always thinking up new ways to have fun with her partner in crime - tomboy Tomokane - the ditzy Kisaragi is content with doodling cats in her sketchbook. With Namiko attempting (and failing) to keep the energetic duo in line, the quiet and mysterious Kyoujyu seems happy to observe the odd behavior of her classmates. Whether they are transforming a congealed lump of paint into a sculpture of a pudding, playing ‘colour tag’, or making thought collages, the gang live their life to the max through both their friendships and their art.

At the old-fashioned Japanese boarding house Narutakisou, Shiratori lives with a diverse yet strangely-similar group of tenants. Under the tender care of landlady Aoba Kozue, Narutakisou provides a home to people whose personal lives are all painful in one way or another; yet together, somehow, they make up a true family. Not only does Shiratori find a home at Narutakisou, but he also finds himself in love with a girl who is far more than the sum of her parts.

Mayu learned everything she knows about manners from her mother – most importantly, that in any conversation, she should make eye contact at all times and let the other person finish their thoughts completely before responding. Unfortunately for Mayu, this advice is difficult to follow when your friends are a bunch of talkative high school girls, and has left everyone thinking she's overly quiet and shy instead! With good friends such as chatty Miki and shy Hana beside her, Mayu will silently navigate her high school life and have plenty of fun in the process!

Wouldn't you just love to poke in a relationship between two young high schoolers who have a subtle distance between each other? Of course you would. Tsumiki and Io have this subtle distance that anyone would want to jump in between just to bug them. That's what the other characters are there for. Tsumiki, being a tsundere and all, won't be honest about her feelings toward Io. Io on the other hand is unaware of Tsumiki's feelings, hence the subtle distance between the two. Now, let's watch these two and see what events await them...nd idiocy of five schoolmates: Io, Tsumiki, Hime, Mayoi, and Sakaki.