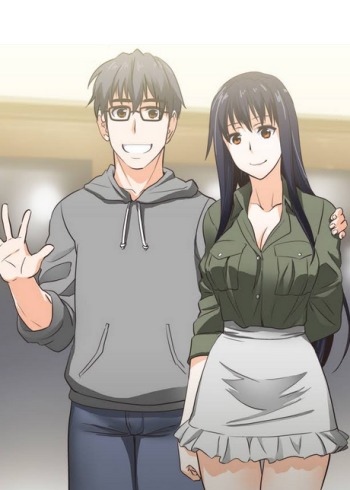 When the hottest girl in school offers Wonyoung a part-time position at her family’s women-only boarding house, Wonyoung is stoked. But when she ditches him and her family yelling how she doesn’t want to work at a boarding house filled with a bunch of “creepy” women, Wonyoung starts to wonder what he’s gotten himself into... Turns out the building is built on some inauspicious land, amplifying sexual desire to an uncontrollable state. It's Wonyoung’s job to help curb that desire for the reputation of the boarding house, and the sanity of the ladies living there.

Let's see.. How can I say they're both brainless fuckfests without being rude? Both these manhwa are from Lezhin and can help you go through lonely times with your favorite hand. Plain and simple.

Unfortunately web manhwa love to create drama where and when it's not needed. Even if H-Campus had more potential at the beginning, they both turn out to be a brainless fuckfest with terrible male MCs and even worse female MCs. If you like one, you'll like the other.

Reassigned and demoted at work. Add to that a broken marriage and Seunggu's life is at an all time low. But along comes a smart and sassy girl by the name of Yura. Hard to resist and with no desire to resist, Seunggu slowly becomes addicted to the drug called Han Yura.

As a couple starts to get distant from each other, they get offered to join their company's secret club.

He Does a Body Good

To say that Hosang's luck with women throughout his life had been underwhelming would be an understatement. That all changes when he gets electrocuted by an electric mat that he bought from his old college friend Gahee. Armed with a newfound ability, Hosang embarks on a life that he had never even dreamed of...

"Our customer's beloved service wasn't for the high heels, it was for my weapon." Jin-woo, who happened to work at his Uncle's shoe shop. As he continues with his boring day at work, beautiful women start popping up in his life!

After spending his entire life in all-male schools till high school, Mingu finally enters college. Making things more exciting is the fact that he's in the Food and Nutrition Department with a male to female ratio of 1 to 9! A virgin and single since birth, this is his opportunity to date girls and enjoy a romantic campus life. But one wrong lie during a drinking party turns his life upside down and now he's been branded as a sex beast all over the school!

Hyunwoo is, for all intents and purposes, a loser. Grade A. Freshman year of college was horrible and his sophomore year's shaping up to be more of the same. But, things take a turn for the weird when he saves the life of an old snake-oil peddler on the way home. As thanks for his good deed, the old man offers Hyunwoo a special potion guaranteed to make all his dreams come true. Add in an apartment building made up of hot chicks, including his college crush, and Hyunwoo's about to have his hands full.