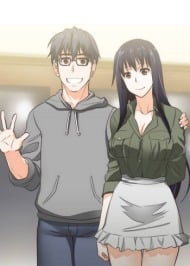 A study group is where students gather together with the same goal in mind and help each other succeed. But not every study group is the same. And nooobody said there had to be a single goal in mind. Sunggi enters a study group that is supposedly focused on studying for the government service exam. But that doesn't mean that's all they have to do, right?

Sstudy is another faphwa serialized in Pornzhin. Just so you know, those guys don't study at all, all they do is have sex and this is also the only thing you're going to see. Sick... or not. I don't know why this isn't called Sunggi's Fuckfest or something along the lines. Plus/minus considerations: STORY: unexistent. I should really end it like that, with the word "unexistent" because literally nothing happens. We have a guy in his 30s, I believe, who hasn't found fortune working and tries to get a degree (I actually don't remember in what, but do you really think that's relevant? LOL). But he can't pass exams, so decides to join a study group JUST because the organizer introduced him to two cute girls. Yes... Well, that's how the study portion ends and from now on it's free sex! Why sex? Because that's not a real study group, it's a sex group for singles. Man, the plot is overflowing right now! To be frank, I lied to you: the protagonist is going to learn a lot, but not from books.. you know what I mean? If you still didn't get it, this is a fuckfest with a pitiful try to add a bit of romance and drama that ends up failing miserably. (---) ART: this is the only good point in all this. You know colored manhwa from Lezhin usually look good and this is part of that group. What I don't understand is why all the dudes, potential nerds, are so buffed: they all look like bodybuilders. Also fun fact, I don't know why the artist decided to not censore dicks with the usual white, but they're transparent, making some scenes look silly. (+) CHARACTERS: If the story was bad in general, this might be even worse. The only somewhat decent character in this, MC's ex girlfriend, goes away right at the beginning after 2-3 pages because she realized how worthless the protagonist was and left him like a bum (props to you, girl). This means we're stuck for 51 chapters with the dumbest crew ever. Also I won't talk about the big change the main character goes through, because I'm talking too much shit as it is already. The biggest flaw here is that you, reader, don't care about anyone of them, to the point where, at least in my case, you wish something really fucked up could happen, because everything about this is boring. I don't know why, but every single character in this story has personal problems, that we don't care about at all, and somehow the answer is always sex. To sum it up, I couldn't get myself to appreciate one single character, terrible. (---) This was a bad time for me and I'm grateful Lezhin manga are fast reads, because this could've been way worse than it already was. I don't recommend Sstudy at all, unless you're skeptical and think, like I do, that everything needs a chance and should judge by yourself.

this is the worst garbage I have ever seen. Story ? there is not. You see a random loser MC that will join a sexstudy and fucks around 10 different girls. One by one chapters by chapters. Sometimes those girls are being fucked by MC's "friends" and that's all. If you like this story then you tend to be more dominated than dominant. It's litteraly cuckland. The "main" heroine is a slut that will dump MC to make up again with her ex that previousled dumped her twice (yes she does not have an happy ending with MC i spoil you to help you believe me). Every girls are basically sluts thats lives to fuck. Chapters after chapters each mens and girls fuck with an another one. It's confused you dont even understand what's happen but what I can say is that the MC has probably more of his "friends"'s sperms on the d*ck than he has you know what. Art is just decent. The story tries to "learns" us something = no matter what you want, you cant have everything and you cant have an happy ending. But a missed happy ending will give you the glimpse of an another happy ending. So, basically, all this shit was to "learn" me that you cant finish with a girl that you like everytimes ? Its not even the problem there. Every characters were rotten by the sex I have never seen a gathering of filth like this in my entire life, all manga/books in it. Characters didnt have any psychology or romance at all. It was all based on sex and nothing else. I have only one word to describe this = stupid. It was the worst read I ever had as it was bad. Chapters after chapters I was seeing girls turning like if they were on a table. Even the "main" "romance" is with a big slut that will dump MC for a jerk that will probably once again dump her later for the third time in a year. Even if you are just looking for a fap material it's a pitiful read. I didnt fap on this sh*t but art is just decent you can find waaaay better and I mean fu*k. I wouldn't want to fap on sex scenes with girls that are turning with MC's friends, it's degrading and pitiful. I cant find anything to serve this manhwa. Bad for fap, horrible for romance, frustrating for sex, disgusting for characters development, shameful for the story, average for art, pitiful for comedy. I dont know... If you like watching cuck scenes everywhere (I wont judge you of course even if I want it) then you can try this thing. The words are not even exaggerated. It's totally shameful. The "lesson" the author wants to teach us could have been interesting if at least the story was good with good characters. But, seeing that, it's like watching a bad porn video with a quote at the end of the video to learn you something that you probably already know, it's totally stupid. You really need to read this if you want to understand the concept of a pitiful story with disgusting characters. Yes they were truly disgusting and pitiful to see. Even seeing a drugged man that cant live without his things is less pitiful than seeing mans and girls in that situation. The less a character appeared, the better he was because at least you couldnt see what kind of s*it he would do. My top of the worst characters : 1. Ha Yeoung (main girl) she spent the whole manhwa doing the tender girl kind with MC but basically she spent the whole manga cucking the MC with his "friend" or with her ex. In fact, she cucked twice the MC with her ex. 2. MC. He started like a normal loner scumbag, he finished like a human scum that only thinks about sex. He quickly became addict and cheated his "girlfriend" (the number 1) with all the other girls he were fucking previously. 3. MC's main friend and funder of the group. It's a scum. He only thinks about sex and he's an egoist. Basically I cant count how many times I wanted to send him to hospital. It's useless to say that he's the most active on this "table" of fucking turn by turn every girls with MC. 4. Aju. A cute 22 year old girl that seems like a high school girl. Basically she's a slut and you will quickly nottice it during the first chapters. She was genuinely deceiving MC when he was a loner scumbag by fucking MC to "heal" his heartbreak. Then she chose the good words to make MC believe that MAYBE he can go out with her and then the next chapter you see her on the arm of someone esle watching MC with a BIIIG smile to make him understand that he is just a sextoy at her eyes hihihi. Nice girl huh now I even want to put her in first place on my list. Yes she's the cliche of the girl that you had in your high school/middle school that was sucking boys in the toilet. By the way she did that with MC too. Basically each characters are fucked like that. I have never seen that. I would already been in jail for multiple crimes if I was MC.

The characters are not likeable at all. Everyone is an ass, and the love tangle of yarn is ridiculous. There are love triangles stories out there that aren't bad, but this one just goes into being ridiculous. No really, this is a love dodecahedron. And now that I have gotten further in, it turns out that it is just a posessive triangle, no love involved. Don't read this. it is bad Ther art is pretty.