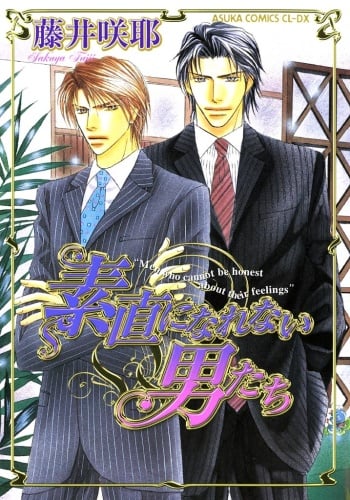 Ibuki's type is a rich older man, but why does it always turn out that whoever he falls for is married...? After getting his heart broken yet again by a married man, he decides he's had enough. At work, though, there's an unsociable and somewhat impertinent new hire, Touma, who keeps stealing glances at him. Touma is younger and a far cry from his type, but when Ibuki teasingly asks whether he likes him, his response...?!

Madman in Love, I'm Begging You to Feel the Same

I'll rape you as your fiance sleeps in the next room... If the two of us had our own world I wouldn't need anything else. Reiichi, a perfectionist who's a loner at work, and his senior Chiharu. Chiharu is the first person to accept Reiichi for who he really is, so Reiichi falls secretly in love with him, but soon becomes frustrated by Chiharu's fiance. Reiichi tries to suppress his feelings in order to preserve their relationship, but then, a certain event blurs the lines...

It seems like there's something about the guy from the head office? With the rumors spreading around, Shiina had to be transferred to the local office's General Affairs department. Everyday, he commutes by bus early in the morning to avoid crowds that trigger his trauma. One rainy day, he decides to go home by car with Niwa from the Development department. However, he couldn't stand it, and ended up getting a panic attack. Even so, Niwa reached out to him without hesitation. "Whenever you feel uneasy, I'll be right beside you to help." From the next morning onwards, Niwa started to take the same bus.

I'd Rather Sleep with You Than Work

My colleagues call me the "snow demon", and I don't blame them; I can be cold as ice, and I have impossibly high expectations of everyone. But, after sleeping with my coworker Yoichi, my imagination's gotten so hot and steamy! In the office, I'm constantly getting excited at the thought of doing it with him unprotected...! He's so in love with me I can't get any work done, but I'm not complaining!

Nara was recently dumped by his girlfriend due to his obsession with huge boobs -- now suffering from boob deprivation, he turns to his friendly co-worker Iida-san for advice. Blessed with a muscular and voluptuous body, the once-bullied Iida-san's spectacular pectorals attract the attention of Nara, just waiting to be touched...

Okumura's first impressions of his new coworker, Takamine, were 'hardworking but untrustworthy', but he didn't realize, he was actually helplessly cute…

Masahiko Sakaki is the head of a furniture import company, happy to be in the casual relationship he's in. He wasn't supposed to fall for his business client, Kazuki Okada... A heartbreaking love story between two very pure adults. Includes a bonus story about what happens after!

Hoshimi Sudou’s reputation at work is legendary. But it isn’t tales of his astounding performance as a scientist that has everyone talking; rather, his affairs with his female coworkers fill the daily office gossip. When his coworker, Hirokawa, stumbles across Sudou playing in a street corner jazz band, he begins to see the sensitive side that Sudou hides at work. And after a night of unforeseen passion, the pair begin to develop a complicated relationship that unfolds into a stirring drama between their professional and private lives.

The Intelligence and Analysis Bureau of the N country’s Ministry of Foreign Affairs is an organization that mainly conducts intelligence assessments. One of its missions is called “honey trap.” Male analysts in the ministry are divided into “male roles” and “female roles” – they then get paired up as “buddies” and carry out secret trainings night after night!! The chief analyst, Haryuu’s “buddy” is Todou Mao, a beauty who joined at the same time as him. During their first night of training, Haryuu loses his self-control because of Todou’s charm, and ever since then, their relationship has become awkward―?!

I Love You, Chief Clerk!

Kariya panics when his perfect 10 co-worker Shishido professes his love for him!! And to make things worse, Kariya tempts him in drunken haze!?