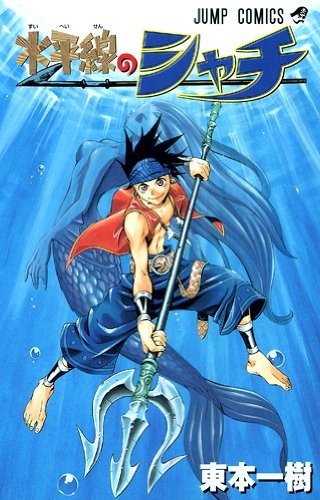 Triton of the Sea

The ocean holds many tales. Tales of mermaids, of underwater kingdoms, and of fantastical beasts lurking in the deep. Spurred by these tales, Kazuya sets out to find the truth, but what he finds is a baby?! Not just any baby, the baby Kazuya finds is Triton! The last of a once mighty and proud race of people from the sea. Triton seems human, but unusual and terrible events begin to happen with all those around him. Who is Triton, and why does he bring misfortune to everyone around him? From the imaginative mind of Osamu Tezuka, creator of the beloved AstroBoy series, comes his original and thrilling take on the legend of Atlantis: Triton of the Sea!

It's about the coastal lifeguard, as Hyogo Kanbayashi tried to make his way through to enter Tokkyuu, the elite lifeguard team.

Spinoza no Umi: Ao no Lifesaver

It's been years since Marie was saved from the ocean, and has lived on a solitary island ever since. Her first and only friend is Canu, a strange creature from the sea. But she hasn't seen Canu in awhile, and ventures out to find it...

In a post-apocalyptic world covered with water, Wadatsumi, a person who lives in what appears to be the last piece of land, finds a mysterious girl dragged by the waves of the sea. Where does she come from? Are there other lands in this world?

When his ship is attacked by pirates, Archer is left floating adrift in a violent sea. But the young urchin is nothing if not resilient. He soon finds himself sailing with the infamous Cannonball Joe aboard "La Revancha," the fastest ship on the East Coast, in search of a legendary cache of hidden treasures. Their dangerous quest will lead directly to a showdown with the "Hoboken," one of the most feared pirate vessels ever to sail the Jersey shores, and its reckless captain, Lee. But there are far worse things than pirates that call these waters home...

In 2071, north pole ice have melted and the land has been submerged. Humanity survived but it's divided into two species: the true humans, those who live in underwater cities, and the Dugons, those who chose to undergo genetic modification to live in the sea. Both species go to war to survive as long as the Dugons consider the humans good to eat. To defend against the Dugons, the city of Mari Ramelle builds a new kind of weapon, the mermaid robot, Salacia. Because of the small size of the the pilot cabin, the robot is piloted by a girl and a boy, both 13 years old: Marin Yuuki and Ushio Mizushiro. The fight for survival is hard, and the city has to build more mermaid robots.