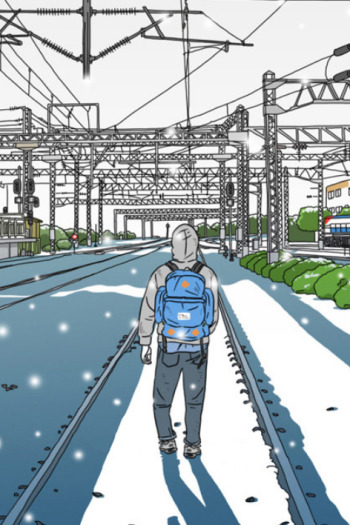 Both I Am a Hero and Subway Line 1 focus moreso on the human monster aspect of a zombie apocalypse, and have a quieter feel (wandering around the abandoned streets, etc)

Beginning on the 4th day after a zombie virus broke out, this is a story about the will to live, human instincts and our selfish desires. A thrilling tale about the survivors of a zombie apocalypse.

As the zombie apocalypse begins in Osaka, chaos descends on the city. Kozue and her friend Yuuko arrive on a flight to Shin Kansai International Airport, only to discover the facility is overrun with the dead and they can't leave the aircraft. Meanwhile, Kozue's lover Tatsuo is in the midst of the carnage downtown. Will the two manage to reunite, let alone survive through the night?

After a man-made pathogen known as the K virus is accidentally released from Fieldwar Labs in the heart of Tokyo, the city is overrun by flesh-eating zombies. In the hopes of saving the last-remaining survivors of this apocalypse, an organization known as Madara sends out its rookie member in a last-ditch effort to find a cure. Young Itachi must survive the zombie-ravaged streets of Tokyo while searching for the missing key that’s integral to Japan’s survival!

Eien no Hizashi no Shikabane

Eun-Sung Lee went to work that day like any other, kissing his wife and child goodbye before dealing with the daily office grind. But no one expected that Seoul would collapse that day as it was overpowered by a swarm of giant, man-eating insects that kill or infect everyone in their path, turning most of the survivors into mindless killing machines. What’s worse, anarchy now rules the streets and humans are now just as dangerous as the insect threat. Along with his co-worker Ji-Eun Seong and a battle-hardened old man, Eun-Sun traverses this desperate landscape in an attempt to find his family, and to keep all of them alive against their enemies at every turn.

Land Of The Dead

A zombie apocalypse has begun...! Survivors are starting to expose their dirty desires in the face of death...!