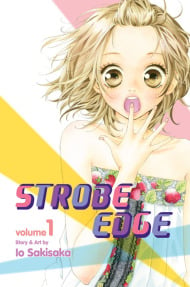 Strobe Edge is a story, which starts off as a seemingly normal story, a typical shoujo, but because of its superior story pacing and character development, it is able to become something special and unique.The mangaka decides to start the story off with a very familiar situation. Ninako, a girl who is very naïve towards love, falls in love with one of the popular guys in school, Ren. At first, all seems good, but we soon find out Ren actually has a girlfriend. Then the manga introduces another boy called Andou, who loves Ninako, and thus the typical love triangle is formed.Well, the plot itself isn’t exactly deep, but it’s developed extremely well. For example, the mangaka leads you to think that Ninako and Ren would make the perfect couple but then decides to throw in a flashback story of Ren and his girlfriend and how deep their relationship really is. Continuing this, she makes it seem like Andou might end up with Ninako, but manages to keep Ren in the triangle stil. I’ve never read a story that there wasn’t a couple that I supported, but I’m actually neutral towards this love triangle. The story makes you feel that, whatever couple happens, it won’t be a happy ending still. This story is really good at showing unrequited love. It shows the true aspect of love, love is not always happy. Even if you give your lover to someone else, there won’t necessarily be another Prince Charming to come and pick you, because love is not easy to get rid of/change. It tackles the question, if I love someone, but that person doesn't return the love back, should I continue loving this person or should I give up? Also, the way it makes romantic situations is very praiseworthy. The manga especially reuses the “train love incident” a lot, where Ninako and Ren are alone in the train. Still, every single time this happens it’s still very interesting as Ninako has different feelings. The love in this story is realistic and it’s developed well.I feel that the only really well developed characters in are Ren and Ninako for now but I’m sure the mangaka is going to focus a bit more on Andou later on.Ren – At first, he seems like a grown up, your typical overprotective boy that most girls like. He doesn’t seem to talk much, so it seems like his character is very mysterious at first, but slowly we see that he is a very confused character. He knows he loves his girlfriend, as the history/bond he developed with her is very strong, but his overprotective character takes the best of him as he starts to care for Ninako, and realizes it too late, that he has feelings. While in the beginning, we see him as a strong character, he further develops into one of the weakest characters in the story.Ninako – A typical shoujo main character, a girl with love problems, but isn’t able to really understand love yet. But don’t underestimate this, as Ninako gets smarter. Yes, she gets smarter, unlike so many other stories I’ve read, Ninako slowly, but surely, starts to become more experienced. Furthermore, Ninako only loves Ren, no matter how hopeless it seems to her, she still chases only after Ren. We may see that she’s very selfish, to be trying to steal a guy who already has a girlfriend, and Ninako knows she’s selfish. She finds herself questioning if its right for her to keep loving Ren so much, but she realizes, no matter how wrong it is, she still loves him too much. I love her determination, and with this trait, even if Ninako looks very weak, she's probably the strongest character in the story. I’m probably thinking too much here, but since the art is very shoujoish, I always feel that the art greatly enhances the effect of a typical setting. As if, it wants us to realizes that she’s using a typical shoujo setting and turning it into something new.I love this manga. Honestly, I think it’s probably my favorite shoujo manga. It’s enjoyable, well developed and each chapter is worth the waiting. This is one of the only mangas, where after I finish reading one chapter, I want a chapter right away, even if there is no cliffhanger. I’m happy to have touched such an amazing story, and it’s been worth every single second of my time.I will end this review with this.Love is not that simple and will always hurt someone.And Strobe Edge has depicted this better then any other manga I've read 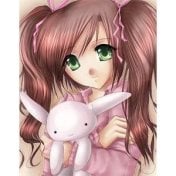 Ninako has never been in love and continuously questions what love even feels like. She then asks her childhood friend Daiki Korenaga, who has emotions towards her, about what being in love feels like. However Ninako is still unsure whether she actually has feelings towards Daiki. Then one day on the train home from school, she bumps into Ren Ichinose, the guy school idol for the female population and the figure whom Ninako and her friend's spend their breaks catching just a glipse of- Ren. After a short incident, a short conversation and his smile, she experiences a new feeling, the feeling she has been longing for...love.

Be warned! I think the other reviews describe the more conventional pros and cons of this manga very well so please read those as well before making a decision. Strobe Edge is a fantastic story up until around Chapter 27 when misunderstandings and convoluted obstacles start blocking the story from reaching a natural conclusion. I don't regret reading what I did before dropping, but I feel compelled to provide a warning to those it may help: Only start this manga if you are not bothered by the type of plot devices mentioned prior or don't mind dropping a manga if you don't like the direction it starts to go in.