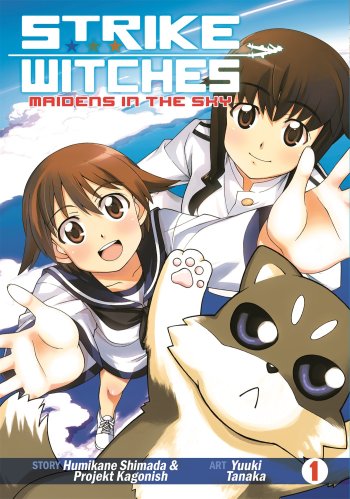 If you're looking for anime similar to Strike Witches: Maidens in the Sky, you might like these titles.

Nearly a year has passed since Lan and Muginami departed Kamogawa in the company of Le Garite and Del Metrio forces, respectively, and Madoka has been carrying on the Jersey Club banner solo while dearly missing her friends. Kirius, Izo, and Array, meanwhile, have taken to running a new beachfront café edition of Madoka's Uncle Hiroshi's restaurant. The continuing presence of Vox Aura (which has been entirely inactive during the interlude) on Pharos is still a powerful lure for both sides, however, for many believe it to be the key both to the destruction on Earth of 20,000 years ago and to preventing an eventual catastrophe for both Le Garite and Del Metrio. That brings Lan and Muginami and their Vox units back, albeit initially in conflict until Madoka can break through to them. But can she do the same when their big brothers, former friends and the respective leaders of the warring planets, also come back into the picture? They are not the only ones with long-standing interests in crossing the Rin-ne threshold, either, as other key players finally make their moves and reveal their true natures.

Centers on the battles between the mysterious alien enemy Dark Spinner and the secret defense unit Earth Granner over Earth Energy, the energy generated from the Earth's rotation.

A group of young space cadets use a technologically advanced mecha to combat an evil extraterrestrial race that is trying to take over the galaxy.