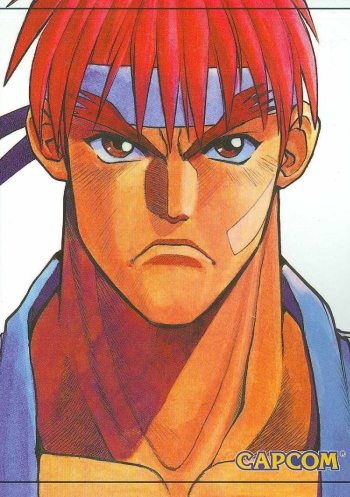 Chinmi tries to enter Kanan with Pushin, a swordmaster whom he met traveling to Kanan. But they are attacked after trying to enter Kanan and pursued by the Border Police who chase them into a waterfall. A fisherman saves them and aids their entrance into Kanan. The people of Kanan are forcibly oppressed by the government. Chinmi befriends the people and makes the big decision to free them with his Kempo. Sorabi Boru, Lieutenant of the Border Police and Jirai, the evil king of Kanan attack Chinmi...

Hanagasumi Highschool is located right in middle of Kabukichou, Tokyo's #1 red-light district. Because of this, the students are constantly robbed and harassed by yakuza, gangs, etc. In order to ensure the students' safety, the Student Council came up with one solution: befriend the legendary "Tiji-kun", the strongest man in Kabukichou. Two students, Motobu Tomoko and Akazawa Ryo, were assigned the task. But when they find out the true identity of the mysterious "Tiji-kun", having a peaceful school-life turns out to be harder than it seems.

Baki is bored. After the conclusion of the epic battle between father and son, he continues to fight in the underground arena and train nonstop, but he always has to suppress his yawn caused by the overbearing boredom. No amount of stimulus or danger can bring excitement to him at this point. Now, with the inclusion of the Prime Minister of Japan in the loop, a massive cloning project is attempting to clone Miyamoto Musashi, one of the fathers of martial arts in Japan. Another fight of historical proportions awaits Baki!

"All you need is the floor and your body. Then all that's left is to make a fist." Shinya Kinoshita, a boy with incredible posture, and Takumi Yanagiya, the 6-time elementary school national champion meet one day by chance … but surely it's fate. As the two laugh and are drawn to each other, the stage is set for this story of the Kawasaki Ukishima Junior High School Karate Club—a fun-filled martial-arts journey full of friendship and smiles begins now!

Fifteen-year-old Otawa Ryuuichi decides to train in karate after being dumped by a girl who only liked strong guys.