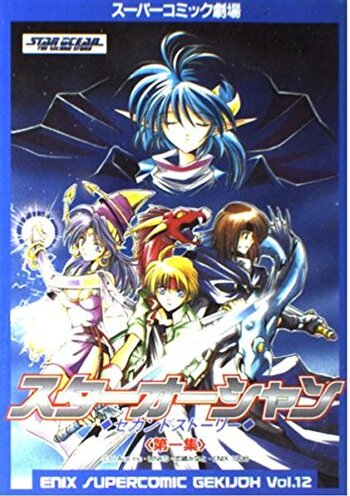 If you're looking for anime similar to Star Ocean: The Second Story - Super Comic Gekijou, you might like these titles.

Legend of Mana: The Teardrop Crystal

Welcome to Planet R, a place where four crystals representing the elements keep the world in balance. But the crystals of Earth, Fire and Water have been stolen by the evil Deathgyunos. Linaly, a descendant of an ancient protector of the crystals, and Pritz, a headstrong young man, must protect the Crystal of Air to prevent the world from being plunged into Chaos. With the Tycoon military and air pirates after them as well, will they be able to succeed?

Kiel Aronnax, scientist extraordinaire, was being held at the famed Alcatraz prison until he chanced upon the lovely thieves Loretta and Mirabelle. With their help, Kiel managed to escape – along with the unexpected treasure that the ladies had heard about: Sheyenne, an amnesiac man trapped in the body of a boy who has the ability to use legendary firepower known as ARMS. Alongside Kiel, Sheyanne travels from place to place, getting into trouble along the way and searching for his old body; and wherever they go, Loretta and Mirabelle always seem to be as well, on their search for more rare treasures!

Roan and Yuufa are two travelers in the world of Ragnarok, a place filled with magic, swordsmanship, quests, and of course, Porings! Armed with plenty of spells and potions, the two set off on a journey to find fame and fortune with newfound friends Maya the item-seller, and Takius, a mage who is determined to find the "truth". But with so many harrowing adventures ahead of them, will there be enough heal spells to go around?!