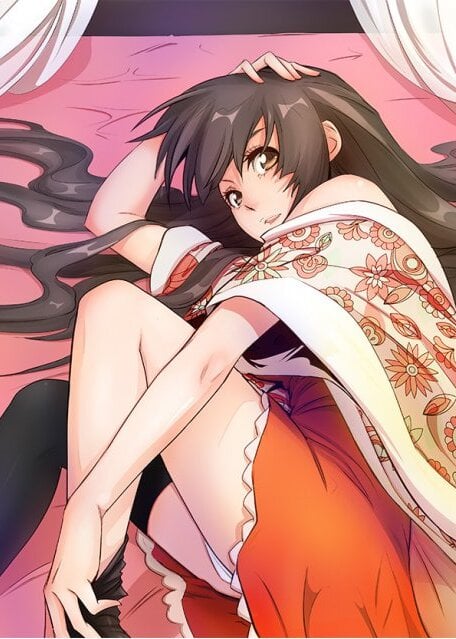 this manga is based on light novel and it still in its begining but it look awesome i like the fact that the characters can become powerfull by training and cultivation and i really disliked the main character personality because he is too week but the manga still awesome ... and i can't wait to see how they will find the paths to climb the Tower of God ... so im verry verry exited to read more ... hahaha

Panlong may have spoiled the super magic school thing even though it jumped around at lot. This is just as good though the story does the same bullshit and jumps around as well but it's more of a consistency sorta thing rather then just years jumped to important parts.

The main character sleeps during an intro and sees a huge fireball coming at him while he's naked. He wakes up with the ability to circulate qi in his body better and faster then most and far surpass anyone else who's applying to the school. The this jumps in leaps and bounds unlike anyone ever. The main guy goes from meek bitch(gets the shit kicked out of him), to obnoxiously awkward(two hotties hug him for warmth), to cold Vulcan uncaring(slaps the shit out of bully and stands his ground), to badass(beats the piss out of a huge bear and a bunch of assassins as a student), back to a powerful but meek bitch(the martial fight). Those are some main points but this is definitely worth the read very good done in a day as of now 7-18 pages(107 chapters as of 12/29/17).

I feel like SMGT is like tales of demons and gods (same author) but in quite a little bit less good and complete than tales. Basically you wont be disoriented between them. If you like one then you will be hooked with the other. The setup between both is very similar. There are a bunch of similarities even in the arcs.

Then you will tell me "then why reading both and not only tales of demons and gods". Well basically the more you progress throughout the story, the more it will be different in how the story goes. Star martial god technique is like an alternative version of tales but with a different focus and a different course of actions. It could have happened in tales if the main character just wanted to focus on his clan and not to save his city. Be aware that it's not only an alternative story.

It's a different story, the world is similar but different, system of power aswell and characters does not react the same way. That's why if you like one, you will like the other, you will basically find everything that tales already has, the same recipe but differently used. Some badass main character moments, genius MC that humiliates cocky nobles, a little bit of romance, good friendship between characters and more.

The art is good and quite refreshing even if it's not a masterpiece, it's a little bit blurry in the drawings.

The characters can be quite predictable overall. The nobles are almost all jerks who are bad (the good ones can be counted with a hand I guess lol) and when MC helps someone, then this someone can help him in return by giving his life to protect him. I think they are very brave and loyal in this story.. That's what I meant by predictable but it's not annoying at all.

MC is less interesting than tales's MC, he's just born as a powerful guy. Apart this, he's like tales's MC but in less developed and he's more cold and tense. Yunning is devoted to MC after having seen that MC will give up his life to protect his friends. She's adorable but it is such a pity that MC does not seem to like her in return after everything she did and she's still doing.. I hope this poor little girl wont be screwed by the author, not after he showed her like litteraly the second character that you see the most in the story and that helps the most MC.

Lin Hong is devoted to MC too, he has similar ambitions to MC but he has taken an another path than MC. If MC is more like Suzaku in code geass then Lin is lelouch, he does the dirty work to achieve his goal because he does not believe in other means. The only difference is their friendship. Unlike in code geass they are together and do not fight themselves.

This is one of those with a good premise and then it turns to a boring fest. The mc is weak, not that smart, not even in the least cunning, feels bad from killing baddies, is indecisive. You could take any of the popular manhua mc and replace this one and the story would become better. But even the plot in this one is so confusing and not in a good way. It's not a complex plot just that unlike the usual wuxia stories the author wanted to create an interconnected world. In typical stories mc is bullied/weak has to fight for his branch family or is kicked out of the clan, goes to a bigger clan/academy, travel the world, etc you know the drill. Here he stays in the same country and same clan and make it his base so the whole story involves the same people throughout the plot and the conflict the author found is a war. After it's just too many clans, people, and boring stuff. As if it wasn't enough you have the main characters who are basically 14 yo, think like 14 yo and act like 14 yo. I've always had a problem with these kids because it justify their stupid behavior. Make story with adults.