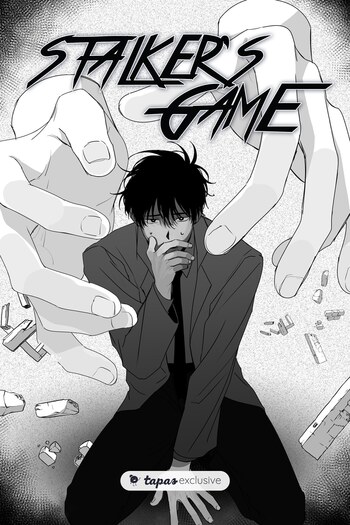 A stalker suddently appears on the life of a ordinary worker. And no matter what the worker does he's unable to make the stalker stop. The thing just continues to get worse!

The story is really good. It gives me mixed feeling reading about a stalker because it's just too creepy but at the same time captivating. About the characters... they're development throughout the book is amazing! Aside from the MC and some co workers the characters are pretty unrealistic to the point that it can be spine-chilling.

The art is really good too and the expressions amazing though there are some panels I cannot really understand the drawing or what the draw represents.

So in the end wtf was that Yoonil lad's role in the story? The drawing too man I sometimes confused the two stalkers as the other coz they look so DAMN SIMILAR!!! Are these obessesive psychos from a stalking guild or some shit you'll NEVER know since everything that's played out seems to be up to the reader's interpretations, the characters' feelings included.

I dun think there's any right or wrong in whether you enjoy stories like this or naht, it's kinda in the middle for me. Dis is just another piece of Stockholm syndrome case where the two dudes make the other suffer just as much, stalker dude is way worse that's a given since he's the perpetrator in the first place, he also stalks other peeps but Hyunsung the "stalkee" ultimately becomes his primary target; Hyunsung on the other hand outright hated this creep, he managed to beat stalker's ass AND reversed the roles (in a way) by tying him up.

To think that seeing stalker dude reminds Hyunsung of the rape-ish traumatic shits he has been put through he still allows himself to be in stalker's grasps when it comes to sexual matters. MY CHILD I thought that particular part instilled trauma in ya, Hyunsung's mentality eventually just adhered to that of a Stockholm syndrome victim's... out of pity for the stalker's desperation, that's the only reason I could think of. It's a big waste of his resolve when he decided to tie him up.

SO, if you want a relationship with genuine feelings involved, NAH. But if you fuck with twisted notions of love involving stalkerXstalkee with one party warming up to the other then OKAY

Yeah a lotta alarm bells with this one lemme tell ya!

It’s basically about a office worker who’s absolutely fed up with his job and has a stalker going after him 24/7.

It’s not a pleasant manhwa to read to say the least, it’s in fact reflecting on real life. I just don’t understand why the office worker doesn’t take the stalking issue seriously to the police. It’s just so frustrating like it sends a bad message to readers!

I haven't read many stalker BL stories yet so I can't say how this one performs compared to others, but individually I liked it! It's probably not the most chilling stalker tale ever and neither goes out of the box, but this certainly makes your mind spin! So I think it's a mission succeeded. Time and time again certain events remind you of the disturbing nature of the situation, with the stakes steadily increasing over the course of the story, the author seriously did a good job with that. They also did a good job with crafting the ending, in which I can't discuss since this is spoiler free... lol, but let's just say I'm sufficiently convinced. All in all, I wish some things were more elaborated, and some people could complain that the MC is too passive, but I just think everyone has a different response to challenges and I didn't find unrealistic. Maybe if you are well acquainted with the stalker genre this might disappoint, but if not, it's a good option!

mmm it was okay??? i mean... it didnt have anything that kept me attached to the story and the characters. that ending tough... it was kinda weird but ok. just another stalker story.