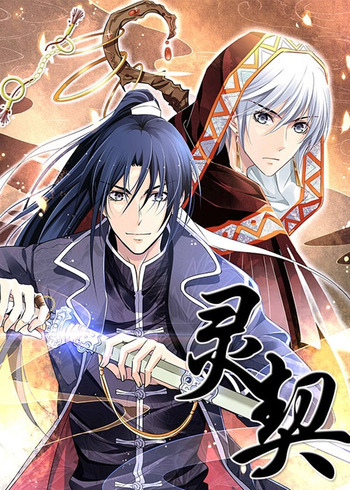 The setting and story is totally different. But both deal with weird beings on earth that not everyone can see and they need to be exorcised. I mostly recommend it because fukigen na mononokean also has the strong feeling of the comeradeship between the two protagonists.

The Master of Diabolism

Spiritpact and Mo Dao Zu Shi always go Hand in Hand. They both show a beautiful potrayal of chinese culture, life and mythology. They are highly recommende for each other. Both of them have the ability to bring you to tears. While Mo Dao Zu Shi is set in Ancient China, Spiritpact is set in modern world but is still manages to potray the chinese mytho perfectly. However Mo dao zu shi has much more feels and violence than Spiritpact.

Keeper of the Pearl

Long ago, a royal prince and the man who loved him were tragically torn apart by death. Reborn in modern times, these fated lovers meet again but have no memory of the love they once shared. Can they rediscover their feelings for each other and finally find happiness together?

If you've read "Seeker of the Pearl" , then read Spiritpact. I am almost certain that in this story you will find everything what you lacked in the SOP. And if you've read "Spiritpact", you can also read SOP. These two stories are very similar.

I Don't Have Schizophrenia

A student who's known by others to be perfectly straight is a corrupted man in private. During a test, he suddenly burst out in anger towards nothing, and his life became entangled with a top student who died young! Being shamelessly seduced and pestered by the top student all day, how can he study properly!

Get Off of Me

Does a doctor save lives or save souls? When a low-ranking student called Chu Han who had never before has this question, met a ghost, a neurotic self-proclaimed, prodigious doctor, changed his life...

At his classmate Mamoru Takayama's funeral, Mizuno is surprised to find that he is not really alone. His friend's soul is apparently unable to rest in peace because he has a lingering attachment to this world. His unfinished business is to steal Mizuno's lips! Will the ghost of Takayama's wish be fulfilled!?

Ye Tong was a timid and useless evil spirit. Lu Yan was an extremely bold and incomparably talented man that could touch evil spirits. Evil spirits needed to rely on absorbing human fears for sustenance, but Lu Yan wasn’t afraid at all, and Ye Tong was an earthbound spirit so he couldn’t leave… So Ye Tong had to worry about being hungry everyday, and get frightened by Lu Yan, get mocked by Lu Yan, had this and that done to him by Lu Yan…

During the early years of the Republic Era, there were many fierce and ambitious people in Shanghai. Beyond the borders of the new area and old area is the grey area. That was where many supernatural cases occurred. Anding Wang and Liujia Ma are hired by a mysterious boss to settle the cases that happen there. When the mysterious cases are solved and the truth is revealed, they realize that all those cases are actually connected to them.

Ella Hao went back home for blind date, but found that the one who had the blind date with her was a double-faced ghost! Like a obedient dog in the daytime and like a bossy ghost king at night.