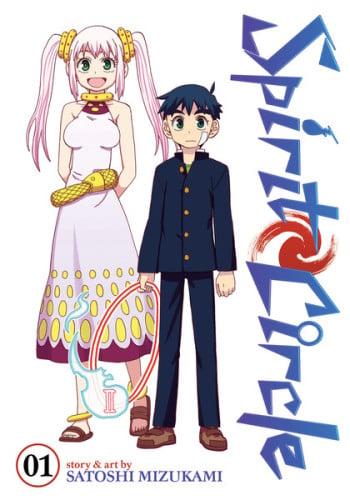 Fuuta Okeya can see dead people. Besides that―and the bandage he always keeps on his cheek―he’s a perfectly normal 14-year old boy who thinks the new transfer student is pretty cute. But to his dismay, Kouko Ishigami wants little to do with him. Strangely enough, it’s the ghost that follows her around that seems glad to see Fuuta. Just when Fuuta thinks he’s won Kouko over, she catches a glimpse of the birthmark beneath the bandages on cheek, and has a change of heart. Not only does she denounce him as her enemy, but she claims that the birthmark is a curse she engraved upon his face during one of the many past lives they shared together. Just what does Kouko have against him―and who is her enigmatic, ghostly shadow?

Spirit Circle is a rather short manga by Satoshi Mizukami, mainly known for Lucifer and the Biscuit Hammer and Sengoku Youko. I haven't read Sengoku Youko yet, but Lucifer and the Biscuit Hammer has a relatively big fanbase which made me pick it up about a year ago (I gave that one an 8/10). I had heard less praise for Spirit Circle and thus wasn't expecting as much going in... but one binge-read session later I found myself adding it to my short list of 5-star rated manga.  Story and characters The first thing you should know is that, unlike LatBH, this is not a battle manga. Instead, it's a story about reincarnation, and bonds that bridge time, space and lives - even if those bonds aren't always nice to have. The story starts in a school, where the average 14-year old called Fuuta has just fallen in love with the new transfers student Kouko, while she thinks he's gross. After trying to get closer to her they get along well, until Kouko discovers that Fuuta can see her accompanying ghost East, and that Fuuta has a strange birthmark (which he was hiding until then). Kouko then claims that Fuuta is her greatest enemy and that she wants to destroy his soul, but first she wants him to know why - and the only way of doing that is by having Fuuta relive his previous lives. She smacks him with a circular weapon - the "Spirit Circle" - and his first "flashback" begins... I won't go into details about what exactly happens after that, because I think it's a lot more fun to discover it yourself. I think it's sufficient to say that all Fuuta's previous incarnations have great stories in various ways: the lives he goes through are all very different, and all serve as to explain in some way the deep grudge Kouko seems to have. The discussions he has with Kouko after those "flashbacks" also adds value to those stories. But of course, the story isn't only about the "Fuuta of the past", there's also the present Fuuta, and the impact his previous lives have on him isn't small: he literally drags around his previous lives, starts seeing friends and family of previous lives in the people around him, and starts mixing things up.  It could be said that it's a pity that the people around Fuuta (his friends and family) aren't explored as much in the present as in the flashbacks, but I personally feel that this manga was always about Kouko and Fuuta, and not about the others. Although the addition of Rune feels really pointless in the long term, since she isn't as important as the cover of volume 1 makes you think. But by far the greatest part of the manga is the way it's all wrapped up - or at least, that's my opinion: all the mystery and conflict is concluded really well, but nothing much is said what happens later in the lives of Fuuta and his friends. Apparently some people don't like that, but I think it ended at the perfect moment. Art Personally, I love Mizukami's artstyle: the character designs are so easily recognised, the art is pleasing to look at, and while lots of panels are quite simple without too much background, there are others which look absolutely great. Overall There are few manga I know of that come so close to being perfect as Spirit Circle: the way the "stories" are worked into the plot and are used to explore the characters is positively brilliant, and the near-perfect score I'm giving it is definitely fitting for it. It's only 6 volumes, so go read it!