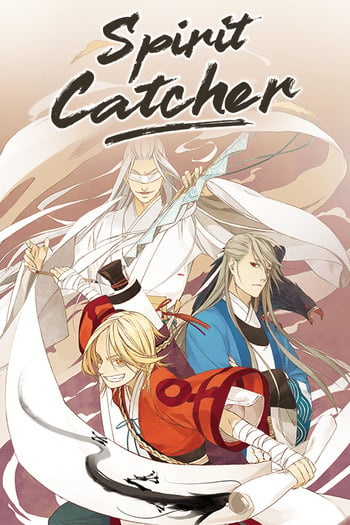 One day, a girl appeared out of nowhere claiming to be an exorcist and turning Liu Yanhui’s regular school life upside down. Ever since his troubles began to continuously plague him, his parents were critically injured by demons and even his childhood rival became an exorcist's target. Eventually, the city he has been living in is at risk due to his presence there… How will a young man with a demonic parasite growing in him survive this world?

It's the Heian Era in Ancient Japan, after numerous disasters and rebellions, The Emperor Suzaku believes Heaven has abandoned him and his advisors secretly consider ways to replace him, meanwhile, the sorcerers known as Onmyouji are dragged into a series of fights against demons summoned by mysterious curses. They will have to delve deep into conspiracies to discover the true nature of these cases.

"I received the gift of life the day I met you." Shikibi works at an antique store called Rakutadou. Because of her strong spiritual power, she has a predisposition to attract things that are not human. Sousuke, the owner of the antique store, also works as an exorcist. He was the one who previously saved her from her misfortune fate. Now, will he be able to continue protecting her from the evil that approaches her?

One youngster, Hei XuYa, self-proclaiming to be history's strongest exorcist, uses his half-beast Black Dog blood to help people exorcise demons as a living... One secret academy isolated from the rest of the world, is a school that specializes in fostering professional exorcists... When Hei XuYa enters the BaCheng Dao Academy, a storm in the exorcising world will break out!

The shogunate installed by the Tokugawa is abiding order, the people live in peace and in a relative prosperity. However, the dark part of the human heart does not cease to arouse their cupidity: it is the ideal doorway for all demons that, by possessing humans, seek to pass into their world. Exorcising these demons is Jonosuke's mission, the master of keys. Known for being the best locksmith of Edo, Jonosuke uses particular locks to put the wicked spirits under lock and key. With the help of the bewitching O-kin, a divine who uses unorthodox methods, Jonosuke is going to meet during his demon hunt some notables of his time, who will prove to be precious allies when he faces a plot aimed at the upper spheres of State.