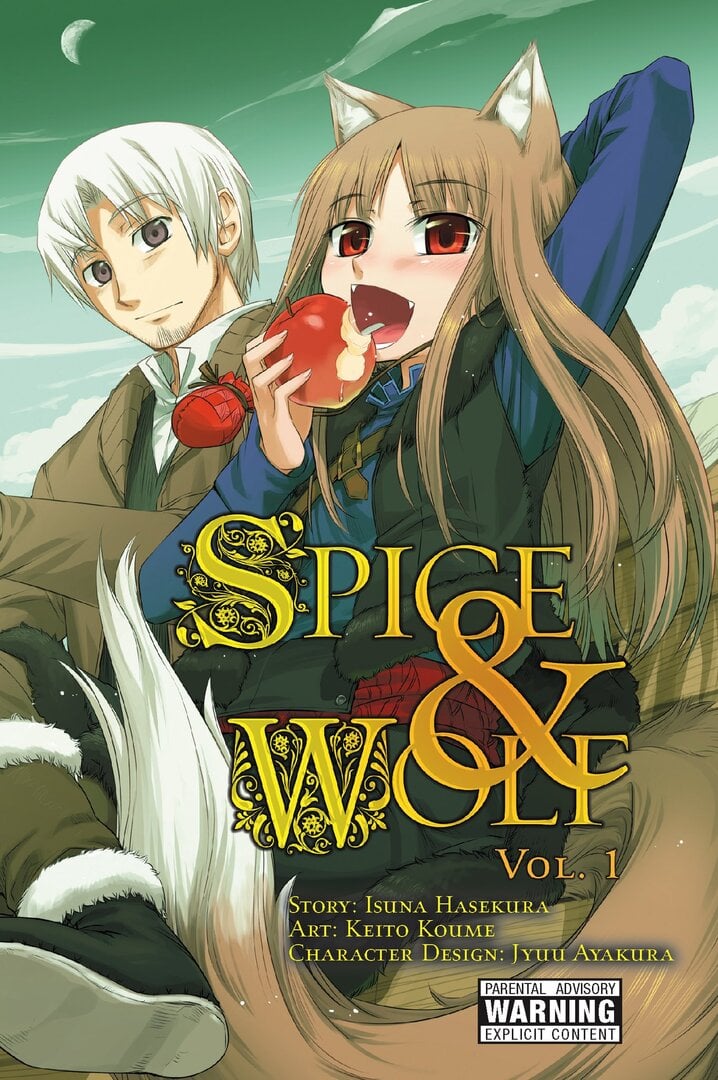 An honestly incredible manga that explores a rich and developed world of medieval commerce and politics with a side of religious struggles.

Story: Unbelievable and unique in the best way. Where most stories gloss over the minutiae of trade interactions in favor of progressing their story, Spice and Wolf presents the business dealings of merchants front-and-center as a core and essential part of the plot. The story follows Kraft Lawrence, a travelling merchant seeking profit and reputation, after he happens to pick up a supernatural wolf-girl known as Holo the WiseWolf in the back of his cart. Their relationship and antics are so deep and thoughtful that they not only provide a backbone to the story, but provide completely understandable conflicts and friendships along the way. The only complaints I have here are that it's at times hard to follow the exchanges of the characters as they come to their conclusions, but honestly it's entirely possible that's just my own stupidity and no fault of the tale being told.

Art: Absolutely stunning. Beautiful and careful detail in every panel showing everything down to the odd shrub in the background, but without distracting from the action and focus. Gorgeous foreground detail as well, with every outfit being distinct and recognizable and every facial expression clearly represented. Everything fits clearly into an organized panel structure such that it's never muddy or unclear what's happening. Normally I'd mark a Manga down for not being in color, but honestly I think the setting lends itself well to monochromatic representation - maybe make it sepia instead of black and white. That's not to say that color wouldn't be appreciated, but this is certainly not missing anything by not having it.

Characters: Easily the best part of an already amazing work. Each character has a distinct personality that drives them in convincing ways, provides beleiveable motives, and offers amusing and endearing quirks. Background is given wherever possible without going into boring or unnecessary detail, so that every character feels like we know enough about them to really get a grasp of why they're here and where they're going. Honestly some of the best and most beleiveable characters in Manga.

Overall: Really just amazing. I can honestly say this one will stick with me as a cut above the rest. I anticipate revisiting it down the road.

A note on tags: Nudity is definitely deserved and present, but it's not egregious nor even present in large amounts. Even when characters appear in the nude, there is generally hair or other things obfuscating the 'naughty' bits, and most certainly there's never anything more than nipples when there's not an obstruction.

It's the story of Spice & Wolf all right, but it lacks the room to properly dig into the concepts it discusses because everything has to fit into dialogue balloons. For most stories, this is okay, but Spice & Wolf's plots revolve around complicated economic systems and maneuvers, and the author had to choose between filling the panels with so much dialogue that you might as well be holding the light novel and sacrificing complexity in the name of keeping things moving. The author chose the latter, and I can hardly blame them for it. You need to do that in a manga.

The problem is that this sits between the light novels and the anime, and as such is the worst of both worlds and the worst version of the story.

The breadth and depth of the exposition in the books has to be cut down to keep things feeling snappy in a panel format, and panels - even repeating the same panel - can never convey the same sense of stillness as a lingering camera shot, nor can panels match tennis-like ebb and flow of Holo and Lawrence bitching at each other in a cart.

The other thing that this manga version is notable for is a lot of uncensored Holo nudity. Holo is often naked in all versions, but it is for non-sexual reasons and not there to titillate the viewer/reader. In line with this goal, Holo is barbie-dolled in the anime, even in the home video version. This is subjective, but I feel that this better suits the mood of the scenes and what the original author was going for. However, if you really want to see wolf nipples, you can see a lot of them here.

I LOVE Spice and Wolf and this version isn't bad or anything, but both other incarnations of the story are better and I think you will have more fun with them.

Ookami to Koushinryou has essentially been from the most wonderful and heartwarming environments, as well as one of the foundational kemonomimi places, with Holo as one of the greatest kemonomimi from all eternity, from her beautiful and adorable appearance, her stylish and magnificent clothes, her charming and alluring personality, her endearing faith as well as her enchanting abilities make her from the most majestic and venerable kemonomimi, the world building is centered around the main family and their good works that help various people and yokai entities in the residences throughout the land. The beautiful and boundless forests of the world that Holo occupies together with the affinity from the spirit world from the afterlife create a calming and wholesome realm which embraces a hopeful aura which illustrates how precious manifestations of the various kemonomimi and their habitations have always been everlasting in the overarching narrative, the luminous presence of Holo herself as well as her relationships with the housing companions alongside the other people throughout the villages appears to manifest Ookami to Koushinryou as one the most wonderful and foundational worlds from all eternity.