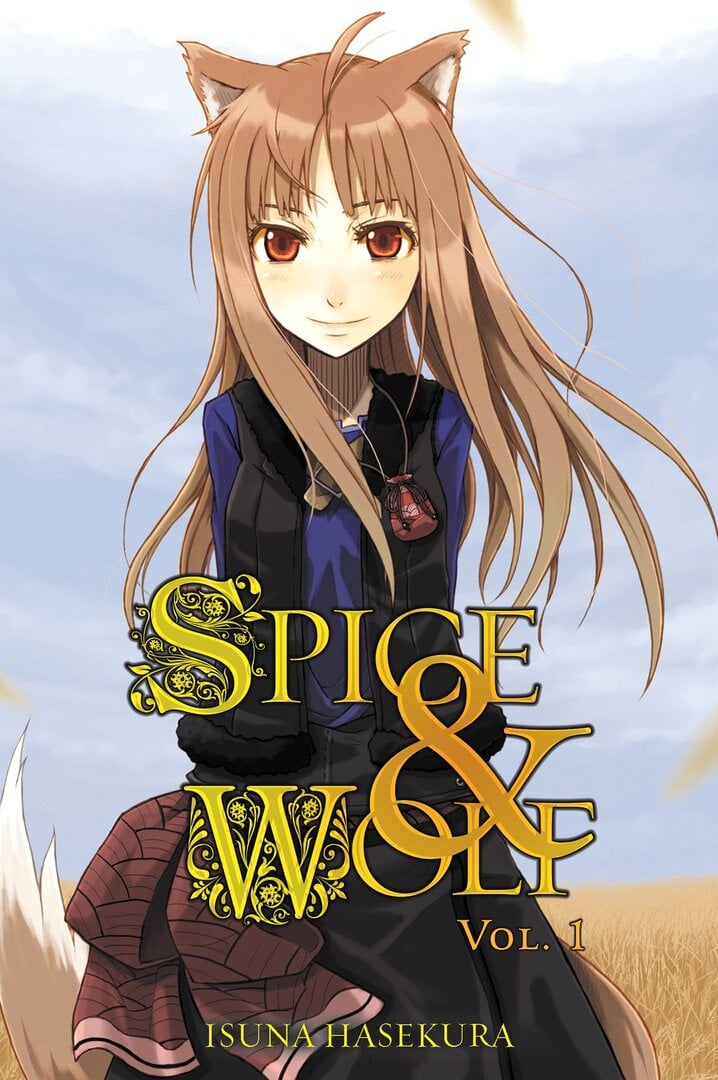 Simplicity can sometimes produce the best results, and that is especially true for this light novel.

People who have heard of Spice and Wolf have probably seen the anime and may not even know it was based off a light novel or have not given thought to read the light novel from which the story originated. However, this novel is a very enjoyable read and can easily get people engrossed in the story.

When I first bought this novel I did it because I really wanted to know what happened next after the end of the anime series. I really enjoyed the series and the way Spice and Wolf II ended, it just made me want more. As soon as I began reading this novel, I was caught in the web that was spun by this book and I simply did not want to put it down.

I don't need to introduce the story but from just reading the synopsis it might appear to be rather boring. Not only from the synopsis but this book deals with many forms of economics as well as politics and of course the relationship between Holo and Lawrence. You might think that if it deals with Economics and politics of the 14th century Europe ( or whatever time frame) this would be rather uninteresting, I say this because I thought that. However, upon reading it when the economics parts came up I found them to be very entertaining.

The only way I could think of it is what if someone took a good story and put in some historical facts and details amongst the story and made you feel like you were learning something. I was surprised at myself because I would be reading of Lawrence trading and cutting deals with businesses and I would be totally invested into the story. I believe how it manages to still be interesting is how the author writes the book, the way things flow together and correlate makes for a good read.

Although, the most interesting aspect of this series is the relationship between Holo and Lawrence. It was funny, heartwarming, and even sad to see what happens between these two. To see Lawrence change little by little and see the same for Holo is great. Seriously this is the reason to read this series, the way they interact is very unique. Holo may be able to be categorized, but she makes this category of her own, if nothing else.

Holo teases but is never mean, she cries but is never weak. She is what I would imagine a 400+ year old Human/Wolf would act like (I don't remember hold old she is supposed to be so don't fault me for a random age guess). More over, sometimes I feel that in anime female characters tend to be cut and paste, and the ones that are different are unrealistic. However, with Holo it was different. She is rather human to me, which may seem odd to say, but I could easily see someone acting like she does and because of that this book was much more enjoyable.

However, Lawrence is like a man caught between a rock and a hard place. He makes a promise to a woman but he doesn't know if he can keep it. He wants to keep the promise but he realizes he might have to give up his dream. If he forgoes his dream he might be disappointed in the end. But, its how he changes that makes him such a good character. He starts out like a man only out for himself and money and over time changes and his priorities begin to change. I always felt bad for Lawrence for all the teasing he gets from Holo but, it was a very good humor addition to the story.

To see these two interact with each other is a treat indeed. Because, like I said, their relationship is the main reason to read this.

This series is two people from completely different worlds finding that common ground and making a special bond out of it. I have many more volumes to read in the series but I feel that so far this series is definitely worth your time!

FEEDBACK: I would definitely appreciate feedback, it would help me to become a better writer.