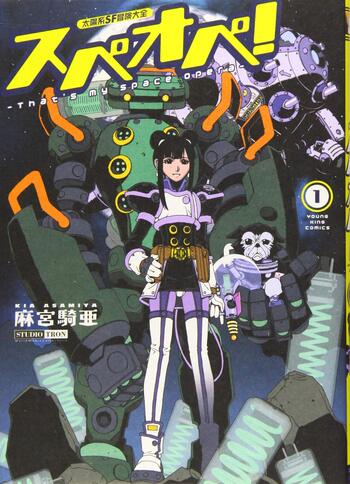 In the year 2058, mankind is about to take its first leap into the distant reaches of space. Using the resources at the tail end of a comet, massive spaceships will be sent to the corners of the universe in an attempt to colonize other worlds, but due to the length of time it will take to arrive at even the closest solar system, the comets must be destroyed in-flight, resulting in super-fast speeds that will kill any life onboard; only frozen sperm and eggs, and machines will survive the journey. Carrying the unborn children of the Robinsons, the first of these ships must now set forth to Ozma; and with its precious cargo is coupled the hopes and fears of all humanity.

In the year 2060, eight year old Dorothy and her dog are mysteriously swept off their planet into the wonderful, magical Galaxy of Oz. An evil witch, Gloomhilda, once ruled the Galaxy through fear and terror but was driven out by the good Dr. Oz. Now, Gloomhilda has amassed an army on the outskirts of the Galaxy and is preparing to win back her empire. Her sneak attack fails due to Dorothy's unexpected arrival. However, Dr. Oz knows Gloomhilda will return. He has a plan which will free the Galaxy of the wickedness of Gloomhilda forever. Legend tells of three magical crystals, the Crystal of Love, the Crystal of Wisdom, and the Crystal of Courage. These crystals were spread throughout the Galaxy and lost hundreds of years ago. According to the legend, whoever possesses all three crystals will rule the Galaxy of Oz for all Eternity. Under the guidance of Dr. Oz, Dorothy and an assortment of "heroes" set out to scour the Galaxy in search of the three magical crystals.

The year is 2050 and an energy crisis is Earth's main concern. A brilliant scientist in Trinity City develops the Trinity energy, a new source of energy powerful enough to supply the entire world. The alien empire of the Elda learn of this energy and plot to seize it by force. They attack Earth's space colony on Jupiter's moon of Io and occupy it. Meanwhile, the Trinity energy has been applied to three giant robots that combine to form God Sigma, a mighty robot led by martial artist-turned-pilot Dantou Shiya. With its mighty sword, it now stands between the peace of Earth and the power of the Elda forces.

It is the year 2099, and laser-driven photon ships roam the galaxy in search of intrigue and wonder. On a search for discoveries, the newly-built Starlight set out on its maiden voyage, only to run across a mysterious young woman and a strange alien message which only she can decipher. Following intricate clues which hint at the origins of civilization as we know it, the crew of the Starlight now set off for a distant galaxy where their destiny, as well as the future of humankind, lies in wait...

The space travelling company, YAT, is thrown into the unknown realms of the outer space. At the same time, the group encounters the psychic, Maron, and scientist, Note. Subsequently, the two of them are attacked by the evil monarch, Ganon. Note was captured and taken away after suffering an attack from one of Ganon's followers, Baras. In order to rescue Note, the group had to use the instantenoeous portable machine which Note invented so as to travel to Ganon's planet. However, no one knows where the planet is...

In the future, a dimensional tunnel in space allows people to travel almost anywhere in the universe aboard spaceships. Many travel companies take advantage of the situation and offer tours to faraway planets, such as the Yamamoto Anshin Travel company (YAT for short).  Staffed by its captain Yamamoto, his daughter Katsura, mascot Bukki, robot Kanabi and others, YAT is soon joined by Goro, a boy who’s been searching for his missing father for some time.

Curtis Newton, aka Captain Future, is an orphan. His parents died in their artificial satellite while he was an infant. His father was a scientist, who has abandoned earth for the satellite to dedicate his life for science along with his aging friend the genius Dr Simon Wright. Wright senses his death, and decides to implant his brain in a mechanical container. They both manufactured a superior robot and an android. Captain future dedicated his life to fight evil along with his three men, the brain, android, and robot.