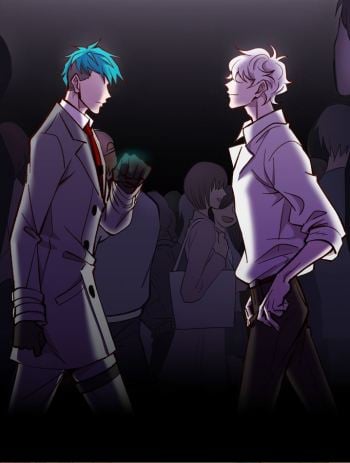 Special agent Xian Yu, who lives only for justice, meets the worst partner in a most unexpected way. Other team members are very happy with each other, but why are we the only one like this? A special agent and a criminal who are forced to be a team - can they become lovers?

It's rare to find a full-colour BL superpower action webtoon. And, with a good plot and independent characters too.  The story is more action-fantasy than shounen-ai, and focuses on the conflict between the police force & ESPA and the villain organisation (so far). The summary from Baka-Updates Manga tells the story better than the one on Anime-Planet: "In a world where certain people, titled "Knockers," have awakened to innate supernatural abilities, Agent Xian Yu is a member of a special ESPer crime-fighting unit and puts righteousness above all else. Kirscher Schneider doesn't care much about justice, but he does set about enforcing it in his own unique way.When these two men with polar opposite personalities meet, sparks fly, but the emergence of a Knocker-run mafia group named Monarch means that they're grudgingly forced to team up in order to defeat a common enemy." I'm not sure how the story will be able to develop the relationship between Xian Yu (blue haired guy with strong wind powers) and Kirscher (white hair guy with strong psychic powers) fully in the last 30 chapters, as their relationship has been slow so far. There have been plenty of interactions between them, but none too romantic. Nevertheless, they seem like an entertaining duo, and could be compatible. Maybe the story will depend on the fact that they are each other's soulmate (or "Karma", in the story) to develop the relationship at a natural pace. Also, crime-fighting naturally needs cooperation between partners, so perhaps they'll learn to care about each other more from that. Xian Yu is lawful-good while Kirscher is chaotic-good (very mischievous). Both seem to be level-headed characters, but Kirscher seems to be more of the scheming type. I like their personalities very much, and there are funny moments in the story. The villains are powerful and scheming too. I like reading the conflict between "the good" and "the bad" in the story, as both sides seem to be equals.  I've checked on other sites like Baka-Updates Manga, and it seems like the 60 chapters is just the first season, and the second season is on hiatus? Checking the official site for the raws (https://www.comico.kr/content/home/153h0nn7ad7e), there will definitely be more romance towards the end of the first season. The art is solid. I like the colours, shading, and the overall character designs.  I recommend this if you want a BL webtoon with an interesting concept, and a solid plot (so far). I'm excited for more chapters!