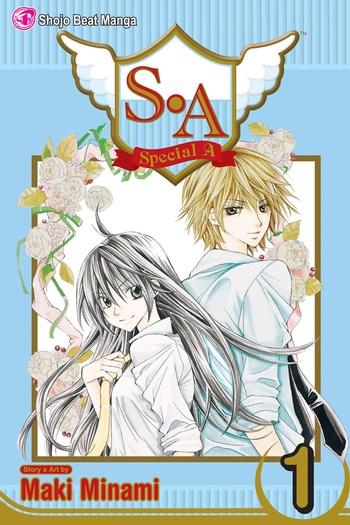 Premise - There's an advanced academy for a small group of elite students to do whatever they want in.

Plot Exposition - Wow, that was fast and wow, this is slow.

Love Interest- Pretty darn interesting and actually has a bit of troubled history, but he's still cheerful and that in a shoujo manga is pretty awesome.

Supporting Cast - A supporting cast built around originality. Every single character is fresh and new and they each get their chance in the spotlight, which is nice in a shoujo manga.

Story -Incredibly fast paced, but the romance doesn't really pick up for a while. Very brave in its narrative, each volume feels like random important events are just being shoved into small panels and by the time you finally catch up with whats going on, there's an entire chapter dedicated to one scene. Its pacing is just so experimental that it actually works.

Characters -Every shoujo mangaka should read this manga. Why? Every character is ORIGINAL. Heck, even the premise is original. But all the supporting cast are just so interesting and quirky you can't help like them. Although sometimes they seem like they're fading into the background, they each get their chance in the spotlight.

Art - It's very stylistic and sometimes really lacking in proportions (specifically, the size of the arm in comparison to the body) but it really works for the narrative and the comedic relief scenes.

Recommended? - If you can keep up with it, YES.

The ending was really lame tbh. I found the male main character to be kind of boring too. I have to say I only give it a 2/5 because the adventures along the way were the only good thing.

Story: #2 Girl in class wants to beat #1 guy in class. The plot was deceptively simple and slightly generic but then again the story does not try to be much more. The story was random, slice-of-life, pretty endearing while remaining fairly humorous and at times unpredictable. It was ridiculous and over-the-top which worked for the most part since it kept the series, which really lacked in substantial plot, from becoming dull and predictable. However, the entirety of the series was lackluster and not really highly memorable. It was entertaing but nothing truly noteworthy.

Art: The character design looked strange at first but their appearances improved as the story continued. There were sparkles and flowers and what-not but instead of always being distracting, they added humor to the situation. The character's range of expressions and inner emotions were probably the best part of the art because they were so highly entertaining.

Characters: The best part of the story and even then they remained lacking and somewhat stereotypical. Hikari may be extremely dense but she makes up for it with her kindness, never give-up attitude, and best of all, her desire to keep improving herself. Kei has inhumane strength and intelligence and will to do anything for Hikari. The other characters are fairly likable with their own set of distinguising traits. They all underwent some kind of character development as well which is a plus. All in all, though they were slightly unoriginal and bland, they were entertaining and added comedy.

Overall: It was entertaining and endearing but still generic and forgettable. This series was mediocre, blending into many other shoujo mangas. Nothing really that bad but then again nothing all that great either. This series would be a fun, light read for those who love shoujo but there are much better series out there that go way above and beyond this.