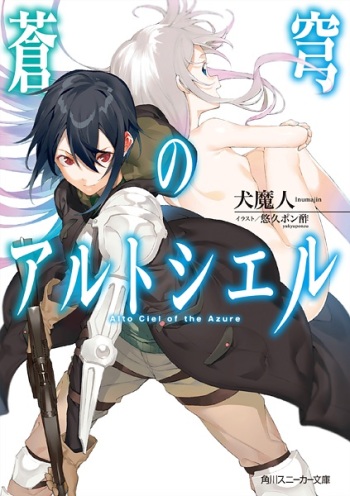 If you're looking for manga similar to Soukyuu no Alto Ciel (Light Novel), you might like these titles.

Inchiki no Chikara de, Sengoku no Yo wo Kakenukero. (Light Novel)

When I came to, it was the year 1990. I, Sumeragi Izumi, am currently in the Game club of a certain academic city in Tachikawa making an 8-bit & 16-bit game, very much enjoying my student life where a buxom senpai just moved in next to me… But, all of a sudden, I was entrusted with the creation of a certain planet as the “Representative of Humanity”!?

One day, Tarou Ichijou awoke to a vast, strange, unfamiliar landscape. Had he been reincarnated into a different world? But to his surprise, he was inside of a spaceship… Was this a world ruled by a future galactic empire?! Even more surprising is that no one had any recollection of a planet clalled Earth, and treated his questions about it as wild delusions. After Tarou has a special ability known as a "gift" awaken in him, he forms a company alongside a salvager named Marl and begins to search for the Earth from his new hometown. So with free use of a live weapon that everyone calls an "antique", he'll overcome any obstacle that comes his way!

Tsukishiro Kotone doesn’t consider herself much of a gamer. That is, until she’s introduced to the virtual reality game “Free Life Fantasy Online,” also known as FLFO, by her game-savvy sister. In FLFO, Kotone decides to become a Zombie, one of the game’s inhuman races–a race that’s said to be quite difficult to master, even for experienced players. Why not, right? When Kotone embarks on her first quest in the darkness of the catacombs, controlling a fascinating undead body, little does she know that this game is about to become a huge part of her real life. Join the virtual adventure in this gaming tale about an online world like no other!

A boy named Eldo, who is reincarnated with memories from his previous life in Japan, likes to operate Robots. He had been living in a remote village unrelated to any machines. One day, while usually hunting using his magic, he unexpectedly fell and got lost only to discover the humanoid robot [Aluminare]. He thought that this is a fantasy world of Sword and Magic, subjects that draws out one’s preferences, Eldo’s heart began to beat so fast at the thought of becoming a pilot.

Desperate to escape her successful sister’s shadow, Euphemia seeks independence as a biotech researcher fixated on destroying Nightz, a dangerous narcotic sought across the colonies. She never believed her life was in danger until a group of men pulled her from her car at gunpoint.

In the not-so-distant future, isekai is a way of life. Now the world has perfected hitting an average teenager with a truck so they’re reborn into a new world for a fantasy adventure. How do you raise the stakes? Set up a televised tournament, of course! Now roaring crowds can follow a chosen Hero through his death, rebirth, and quest to save another world, armed with special tech for Cheat skills, stat indexes, and whatever else is needed. Surely this is all in good fun and no one would abuse this kind of reincarnation technology…!

“I’m good at support roles, can I join your party?" Ragdishart, a young explorer, has the ability "Enhancer": an ability only chosen by 1 in 100, and is infamously considered the weakest ability ever. No-one would let him in their party, but little do they know, he holds a second, more powerful ability. "Multitasking", which means he can simultaneously control 10 or more arts. Requring superhuman concentration ability, it take him only 3 minutes to be able to strengthen his physical ability 1024-fold. Hence, Ragdishart is both the “weakest” and “strongest”. In his adventures, he travels to a ruined tower that extends to the moon, called “Lunatic Babel”. When boy meets deity, the story begins.