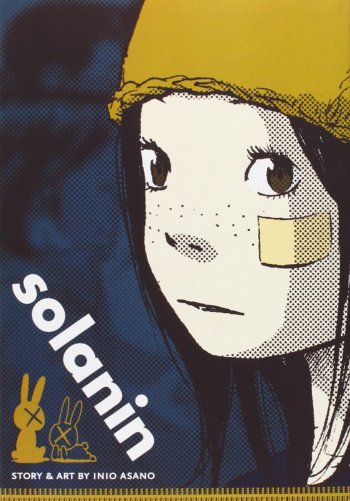 I was never really into manga. I saw Solanin and thought I would give it a try. Maybe it's because it's only two volumes long, so it would be cheap (I prefer hard copies over scans). Thank goodness for me being cheap. This was great!

The story was good. It wasn't anything intense, but the presentation was great. Everyday events of the characters grabbed my interests. I never knew I could be this interested in a slice of live manga that didn't have anything supernatural or wacky. That's not to say the characters were dull. They were great. It felt like the writer put some of his experiences into the characters. They were believable, and I sympathized with the characters.

One of the first things that stuck out at me at first was the art. It was good, and it was different. Today, I can't tell the difference between 90% of these artists. He has his own style, which doesn't come off as loud or over-the-top like a lot of artists. He has a half-way realistic style. Character's eyes aren't humongous, and women don't have oversized breasts. It is really nice to see someone who is different amongst all these other artists who can't break away from the generic style. Or maybe I just need to read more manga.

I think I'll go get everything else he has done... now.

Honestly man, the Meiko character relates to any of us when we graduate from college directly going into the big bad world. We always tend to ask ourselves a series of questions such as "what company will accept me? if I put myself out there?", "where do I see myself in 5 years time?", or "Do I see myself being in a similar career position to what I studied in college/university? ". I felt Asano did a pretty good job at seeing what goes through young people's minds when it comes to knowing how to look after themselves in later life. It's always a huge step to go out into the world of work and leaving your parents home for the first time.

Anyways let's get into talking more about the manga shall we? Lol

I really felt the Meiko character was pretty mature with how things go for her. She doesn't seem to be the type of person who stays in the same workplace, she's more of a social butterfly and knows herself on how she feels about things when going forward with her life. I think her and Naruo did the right thing to separate because they just seemed two different people who had their own way of living. That can happen and I really applaud realism in this man!

I also liked in this manga is that one of the side character's Kotani said to Meiko after they split up " - <i> No matter how well you get along together, sometimes the smallest of cracks turn into a lethal abyss in time."</i> So friggin true man, just because you got along together while in a relationship, it doesn't mean it's 100% . I could be wrong from my guess here but that's how I personally felt from what Kotani said to Meiko.