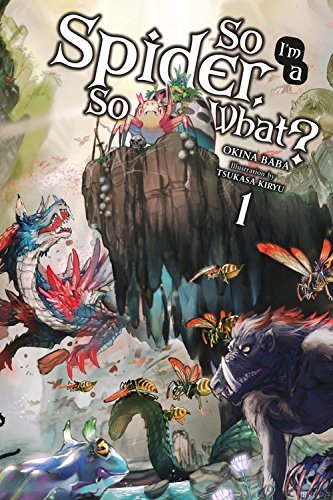 I binge read through all 11 english novels and I'm not super proud of myself for doing so.

I simply LOVE the charcters! Every single one seems to get their own backstories and fun little sideplots that make the whole situation more enjoyable. Of course, everyone loves Wakaba (Unless?? haha), for her daring stratedgies and impossible situations she gets put into. After voume 4, she isn't on her own anymore (like she was with the parallel minds huh?) and she gets to interact and learn more about the interesting characters around her (Like WRATH and Julius). Even the voiceless characters have their own personalities (though we never see from their perspective).

The story is told entirely though perspective, most of the time its MC though it does wander to other Characters like Julius (in VOL 11). This makes it a bit difficult to understand sometimes, but everyone has nicknames for everyone else in their minds so picking up on those makes it easier to understand who's perspective we're listening to. There's also multiple different timelines sometimes, so it gets especially hard to realize what goes on when sometimes. The human side of the story (the special chapters) usually happen in the future (with Shun and Katia) though sometimes we see the perspective of the Demons and the Old Wizard dude (I forget his name but he gets naked for a volume). 8/10 because it can be hard to follow.

There isn't much art to speak of because it's a light novel, but the illistrations that ARE there are super helpful for grasping the situation sometimes. Also, must give love to the catfish monsters. 10/10.

Our main character, Wakaba, is reborn as a spider. She is born into The Great Elroe Labyrinth, a continent-sized dungeon where magical beasts slaughter and maw at each other constantly simply for the sake of survival. The novel depicts our little spider's hardships' hurdles, and her triumphs.

Regarding the characters, they are independent. Honestly, I am confused as to how other reviews do not understand that our MC's upbringing (literally) defines how she perceives and interacts with others. From the moment she was reborn, she had no one but herself. And thus, often, we find our Wakaba talking and depending on herself。

So the instance where we see her interact with a foreign body, obviously, she would not care too much about them. For a seemingly endless amount of days, she spent alone and simply trying to survive whatever came her way. So it would make sense that it would be difficult for our Wakaba to open up to a foreign body who wasn't there when she experienced her struggle.

As for the story, the novel tells two stories at once: the story of Wakaba's reborn incarnation in the Great Elroe Labyrinth, and secondly, the story of her classmates as they spend their time in a school slice-of-life-esque genre. The former, has a lot of emotion and character, and the reader builds a relationship with Wakaba and desires more regarding her success and dispositions. As for the latter, honestly, it is bland. The characters are two-dimensional. And throughout the chapter's sequence, I often desired the classmate's utter failure and agony; however, I was always disappointed.

At some point, it was more enjoyable to simply skip the side-story chapters rather than their actual consumption.

One thing that griped me about the side story is that it's full of red herrings, making it unenjoyable.

TL;DR:
Our main character, Wakaba, is an independent spider who goes through many hardships and struggles. Though a little narcissistic, is lovable and lowkey.

Highly recommend it if you're willing to put the effort into skipping all of the side-story chapters (they're absolutely garbage and insignificant--I found that they end and converge at around Volume 6,l and it's smooth sailing from then onwards).

I just finished volume 6. The story is enjoyable. The only big complaint is that there are a few points where I am not sure who the story is following in the beginning due to a change in perspective and not enough information has been given. Also, the story follows two seperate times in the world with a 10 year difference. It took a few volumes before I was able to grasp the timeline appropriately.

Many of the secondary characters are quite interesting.

This series definatly has a freash take on the isekai genre that makes for an enjoyable read. I recommend it.

I will give an overall to this novel a 6/10 rating.