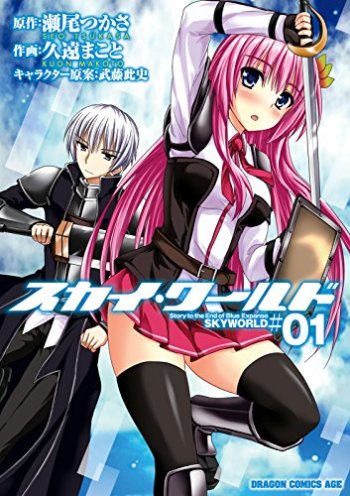 Following the development of virtual reality, Thera, a revolutionary and ultra-realistic online game to the almost infinite universe is born. Inside, everyone can become what they want and experience many adventures. But for Sakuu, the first immersion turns into a nightmare: unable to disconnect, he finds himself a prisoner of a virtual world populated by wild creatures. Without access to the interface of the game nor to the items of care, who knows what will happen to him if he loses the life in Thera ... And he is not the only one in this situation: he crosses paths with other players who are victims of the same problem. For these Outlaw Players, game over is not an option. Whatever the cause of the bug, Sakuu and his companions have no choice: they must grow stronger, explore, learn, and sue.

Lara Hoerwick is visiting her uncle Harald, and starts playing a game on his computer while he is away. At first she is excited to find herself in the world of the Epitaph of Twilight, until she realizes that she's stuck in the game. To make matters worse, the game's world is about to be destroyed by the Cursed Wave. Lara's only hope is to set out in search of the Twilight Dragon.

Kirito, having explored the latest beta test, has a pretty good idea of what to expect from the newest SAO launch. With Asuna along, the pair hope to experience the official playthrough together, but there's something about the release that's a little different from before... Certain unexpected tweaks from the previous version have Kirito and Asuna tackling a flood of puzzles anew!

While on their way to Zakkaria from Rulid Village, Eugeo and Kirito encounter a noble girl named Medina battling monsters on the highway. Medina Orthinanos is a noble whose family was banished to the borderlands due to being considered defects by the empress of Norlangarth. Having lost her father in an accident, Medina seeks to become an Integrity Knight to clear her family's besmirched name. Little did she know that the two boys she encountered on the road to Zakkaria shared her goal of becoming Integrity Knights but would one day go up against the Axiom Church and kill the supreme ruler of the church...

In the year 2022, gamers rejoice as Sword Art Online—a VRMMORPG (Virtual Reality Massively Multiplayer Online Role Playing Game) like no other—opens its virtual doors, allowing players to take full advantage of the ultimate in gaming technology: NerveGear, a system that allows users to completely immerse themselves in the game world by manipulating their brain waves to create a wholly realistic gaming experience. But when the game goes live, the elation of the players quickly turns to horror as they discover that, for all its amazing features, SAO is missing one of the most basic functions of any MMORPG—a log-out button. Now trapped in the virtual world of Aincrad, their bodies held captive by NerveGear in the real world, users are issued a chilling ultimatum: conquer all one hundred floors of Aincrad to regain your freedom. But in the warped world of SAO, "game over" means certain death-both virtual and real...

Technology has now allowed the full integration of virtual reality in massive multiplayer gaming. Gamers can now immerse themselves in a fantasy world, and fully experience a role-playing game. The first game to implement this system was called "Eden." Gamers around the world flocked to their first chance of being part of this system. Three years have passed since the discovery of the bug in "Eden." This bug prevented anyone from "logging out" of this game. Players were forever trapped in the fantasy world of Eden, and now had to fight to survive inside the game. Our main character, nicknamed "Teacher," continues to follow the road of the beginners course inside the game. Tirelessly training his skills, he fights alone against any enemy to become the strongest player in Eden.